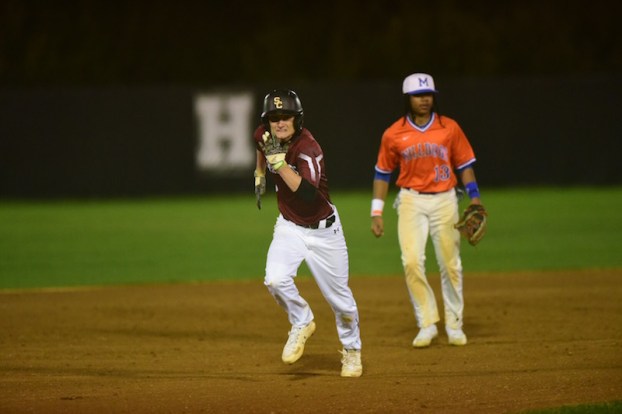 Shelby County was able to pick up a 10-1 win against county-foe Montevallo on Monday, Feb. 25, thanks in large part to JP Fox’s complete-game effort on the mound. (Reporter photo/Keith McCoy)

COLUMBIANA – After dropping two games over the weekend, the Shelby County Wildcats bounced back with a big in-county win on Monday. Feb. 25, as they played host to the Montevallo Bulldogs.

Montevallo (2-1), who started the season 2-0 with a 10-0 win against Vincent and a 13-7 win against 6A Hueytown, was rolling early in the season, but JP Fox looks to be the Wildcats’ leading man on the mound this year, and gave the Bulldogs their share of struggles at the plate.

Fox tossed a complete game and gave up just one run in his seven innings pitched to lead Shelby County (3-2) to a 10-1 victory, which improved the Wildcats’ record to 2-2 this season.

Fox didn’t allow a run through the first five innings of play, before eventually giving up one in the top of the sixth, but by that time, his offense had given him a 9-0 cushion. He finished the game allowing just four hits, one earned run and two walks, but more impressive, he struck out 10 batters in his complete-game win.

While the final score was lopsided, however, the game was closely contested throughout with Montevallo’s Cody Posey having a solid start on the mound himself.

In the bottom of the first inning, however, Matthew Pearson was able to put the Wildcats on the board first pretty much by himself. With one out, Pearson laced a single to center field to reach base. He eventually reached third on an error when JT Pennington laid down a bunt to the pitcher.

After a strikeout put two outs on the board, base running led to the first run of the game. With two outs and an 0-1 count to Wyatt Miskelly, Pennington swiped second, but while in the process of doing that, Pearson was also able to steal home, which put the Wildcats on top 1-0 at the end of the first inning.

The second inning went by scoreless, but in the bottom of the third and fourth innings, Shelby County was able to extend its lead by one run each half inning.

In the third, a leadoff walk came back to bite Montevallo, as Connor Aderholt eventually advanced to second on a sac bunt, before stealing third and then scoring on an error by the third baseman.

In the fourth, the action came with two outs. A walk to Austin Harris and a single from Aderholt put runners on the corners. During Greg Oliver’s at bat, a passed ball allowed Harris to cross the plate, and while Oliver ended up striking out, the Wildcats had taken a 3-0 lead through four innings.

Each inning at the plate, Shelby County was heating up, and then in the bottom of the fifth, it all came to a boiling point.

Two errors to lead off the inning quickly put two runners on with no outs. After a sacrifice bunt moved both into scoring position, Pearson was able to score on a passed ball during Miskelly’s at bat, before he hit a ground ball to the shortstop that ended in another error and allowed Chase Franklin to cross the plate for the fifth run of the game.

After a ground out put two down in the inning, Trey Aderholt hit a ground ball deep to the second baseman that ended with an RBI-single bring Miskelly across the plate for a 6-0 lead.

Following a walk to Harris, Clay Aderholt doubled to right field, which brought in both Trey Aderholt and Harris for a 9-0 lead.

The Wildcats ended up loading the bases after that, but were unable to add to the lead, but with that nine-run advantage and Fox pitching so well, they sat in a good spot.

In the top of the sixth inning, Montevallo answered with an RBI-double from Posey at the plate, but that’s all the Bulldogs could muster.

The Wildcats came back and added a 10th run of the game on an RBI-single from Harris in the bottom of the sixth, before Fox closed the game out with a 1-2-3 inning in the top of the seventh.

At the plate, Connor Aderholt had an impressive day going 2-for-2 with three RBIs, two runs scored and one walk. Kaden Cardwell also added two hits and went 2-for-4 with one run scored. Pearson added a 2-for-4 day with two runs scored.

Trey Aderholt and Harris added the other two RBIs after picking up a hit apiece.

Montevallo was led by Pose with a 2-for-2 day featuring one RBI and one walk. Malik Inabinette and Clay Colley had the other two hits for the Bulldogs, while Colley also added a walk.

By ALEC ETHEREDGE | Sports Editor NORTH SHELBY – After a complete-game, no-hit shutout against Stanhope Elmore in his first... read more