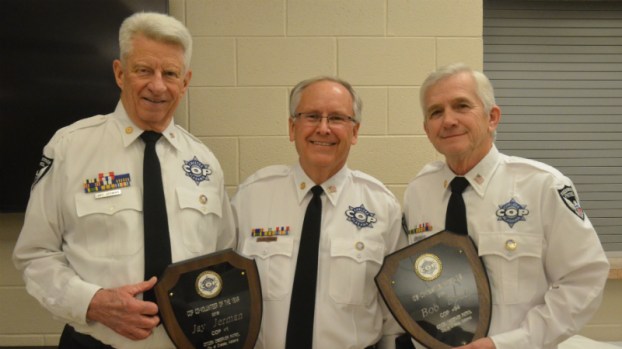 CHELSEA – The Chelsea Citizen Observer Patrol holds an awards meeting each year, but this year’s edition on Tuesday, Feb. 26, was special because it marked the organization’s 20th anniversary.

“This is quite a milestone for us,” COP Director David Cheek said at the meeting, which was held at the Chelsea Community Center.

In addition to awards that are presented each year, COP for the first time recognized two members—Jay Jerman and Alicia Johnson—for 20 years of service.

Jerman founded the organization (he is known as COP 1 in the group’s tradition of numbering members) and introduced the event’s guest speaker: Col. Brad Lynn, who is retired from the U.S. Air Force but still serves through the Civil Air Patrol.

Lynn became an Eagle Scout, obtained his pilot’s license and joined the CAP as a youth—even being named National Cadet of the Year.

He retired after 30 years as a full colonel and since has flown heavy jets internationally in addition to his duties in the Civil Air Patrol, of which he was named chairman on the very day he spoke to the Chelsea COP.

Lynn talked to the group about being a “professional volunteer,” which he said has four components: being highly trained, being totally committed, following a set of core values and having and showing class.

“Being highly trained separates the wannabes from the real deal,” Lynn said about the first requirement and then stressed the importance of maintaining the organization’s integrity. “It’s easy to act professionally when things are going well. Keep your cool and show some class.”

Bob Bush and Jerman shared the evening’s most prestigious honor as they were named Co-Volunteers of the Year.

A special award for leadership was presented to Hoyt Picklesimer, and his son, Chelsea Mayor Tony Picklesimer, helped congratulate the recipient via remote video.

“I couldn’t be there tonight, but I didn’t want to miss this,” Tony Picklesimer said. “I’m so proud of you.”

Cheek gave an overview of the group’s efforts in 2018, including that members performed 563 patrols and served a total of 8,252 hours—a number that was represented by a mock check in the amount of $277,679.80 presented by Cheek to Chelsea City Councilmen Casey Morris and Cody Sumners.

“What you do on a daily basis is remarkable,” Ingram said.

“Thank you all for all you do; you make Chelsea great,” Morris added.

Anyone interested in joining the Chelsea Citizen Observer Patrol should call Chelsea City Hall at 677-8687.

By Emily Sparacino Photos by Keith McCoy and Contributed Clad in a sleek blazer, a pearl necklace and snakeskin kitten... read more