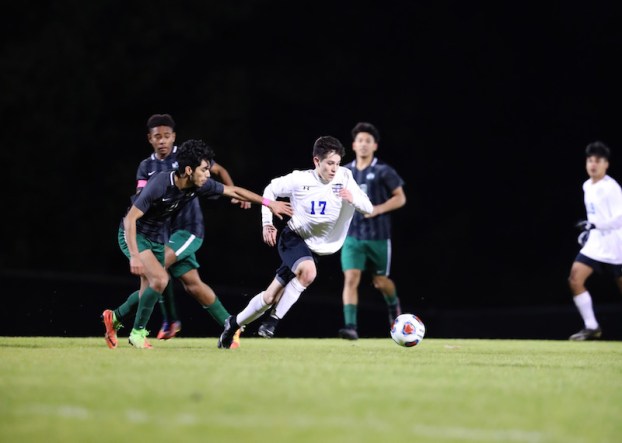 The Chelsea boys soccer team was able to take a 3-0 lead on McAdory before holding on for a 4-2 victory thanks to a late goal. (File)

Chelsea hangs on for win at McAdory

Chelsea traveled to McAdory looking to pick up that win, and gained a 3-0 lead throughout the game, before holding on in the final minutes and adding an insurance goal for a 4-2 victory to improve to 4-3 overall this season.

The first half of the game was an exciting start for the Hornets, who went on the attack early and often throughout the period.

It all began when Chris Nettuno was able to gather a rebound off a blocked shot attempt from a teammate, before sliding the ball by the goalkeeper and into the back of the net for a 1-0 advantage seven minutes into the game.

Chelsea continued to press the McAdory defense and got another great shot opportunity from Andrew Messier eight minutes later. His shot was on a good line and was by the keeper, but ended up hitting the post to keep the score at 1-0.

It didn’t take long for Messier to make up for that missed opportunity, however.

Nine minutes later, Lando Nichols played the ball to Messier in the box, which allowed him to rip another ball toward the goal. This time it was deflected, but right into the net to put the Hornets on top 2-0 late in the first half.

The Hornets got two more great opportunities on a penalty kick from Tony Nettuno inside the box and a shot from Nichols that went slightly over the bar. With neither of those finding the back of the net, Chelsea went into the halftime break up 2-0.

Chelsea kept up that pressure early in the second half and it paid off with a quick goal after Tony Nettuno chipped a pass up to Matthew Reinsch who pulled away by himself before eventually finding the back of the net for a 3-0 advantage.

McAdory, however, didn’t fold and started putting together a comeback effort despite the Hornets having all of the game’s momentum to that point.

The Yellow Jackets answered five minutes after Reinsch’s goal with one of their own to make it a 3-1 contest close to the midway point of the second half.

After double red cards put each team down a player and 10 players on the field for each instead of 11, McAdory was able to add a second goal 13 minutes later to make it a 3-2 game with plenty of time left to get an equalizer.

The Hornets could have had a much larger lead had they capitalized on other opportunities, but with their defense, the 3-0 lead should have been a safe one.

Over the final few minutes, they seemed to shift their focus back into the mode they were in to start the game.

Chelsea’s defense was much better, and then late in the half Reinsch broke away for the second time in the game to seal the game with his second goal to lead the Hornets to a 4-2 victory.

Chelsea remains undefeated with win against 7A No. 5 Mountain Brook