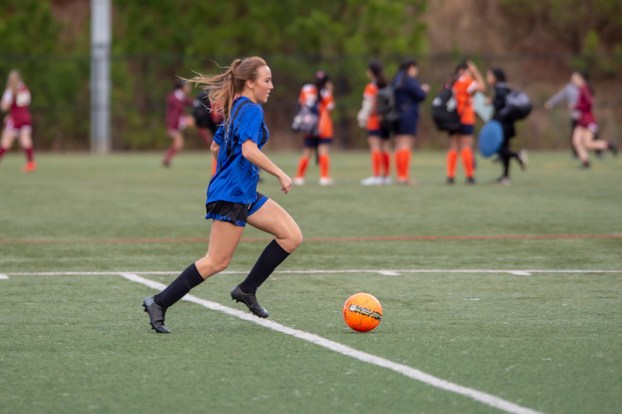 Chelsea's girls soccer team took down Class 7A No. 5 Mountain Brook 3-2 on Tuesday, Feb. 26, behind two goals from Kailey Littleford and one from Haley Duca. (For the Reporter/Larry Dancy)

Chelsea remains undefeated with win against 7A No. 5 Mountain Brook

MOUNTAIN BROOK – The Chelsea girls soccer team had a big opportunity on Tuesday night, Feb. 26, as the Hornets hit the road to take on Class 7A Mountain Brook in a matchup of top five teams, and in big games, the best players always seem to show up ready to play.

The opportunity for No. 2 Chelsea wasn’t to just beat a top-five opponent but do so against one of the best 7A teams in the state, which could cement the Hornets as one of the clear favorites in the 6A classification as the No. 2 ranked team.

While it was a tight game throughout, Chelsea’s Kailey Littleford and Haley Duca both showed up ready to go and put big goals in the back of the net to lead the Hornets to a 3-2 victory.

Early in the game, the Hornets faced some quick adversity as Mountain Brook jumped on top very quickly. The Spartans were able to strike first when they found the back of the net five minutes into the game for a 1-0 advantage.

The momentum, however, shifted very quickly over the next few minutes of action.

Five minutes after Mountain Brook took a 1-0 lead, Littleford made her presence known in a big way. She didn’t just add Chelsea’s first goal of the game to tie the score at 1-1, but she then added a second goal two minutes later to give the Hornets their first lead.

After falling behind early, she and the Hornets responded in a big way to take a 2-1 advantage after her two unanswered goals in two minutes of time.

The game became a little more defensive after that quick onslaught of three combined goals in the first 12 minutes, as the two teams turned up the defensive pressure a bit more.

Mountain Brook was desperately searching for an equalizer before the half, however, and 12 minutes later, it came. The Spartans were able to capitalize on a great chance with 16 minutes remaining in the half to tie the game at 2-2.

The game got back to its defensive tendency after that, but the two teams went into the halftime break even, which reset the game to start the second half.

With two fundamentally sound, well coached and physical teams, it was tough for either squad to find an easy chance at finding the go-ahead goal.

Neither team was able to put a shot in the back of the net in the first 20 minutes of the second half, and that continued over the next few minutes as well.

But with 12 minutes remaining in the game, Chelsea ended up being on the right end of the best opportunity of the half, as Duca got loose to put the go-ahead goal in the back of the net to give the Hornets a 3-2 advantage.

Over the final minutes of the game, Mountain Brook attempted to find an equalizer to force overtime, but Chelsea’s defense did a great job of keeping the Spartans off the board to preserve the impressive win.

Helena softball moves to 3-0 on the season