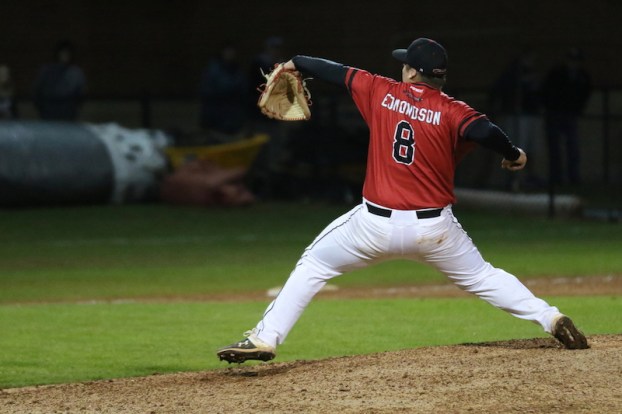 Breydon Edmondson, above, tossed a no-hitter with 16 strikeouts against Gardendale to lead Thompson to a 2-0 victory. (For the Reporter/Eric Starling)

ALABASTER – After a 1-3 start to the season, including two losses to Smith’s Station over the weekend, the Thompson Warriors bounced back with a big 2-0 victory against Gardendale on Tuesday, Feb. 26, thanks in large part to the effort of Breydon Edmondson on the mound.

The senior, who spends the majority of his time at catcher, not only pitched a complete game and picked up a jaw-dropping 16 strikeouts, but did so in a no-hit outing.

While the bats are still trying to get going for the Warriors (2-3) early in the season, Edmondson struck out 16 of the 23 batters he faced and allowed no walks, with one error defensively being the only thing that kept him from a perfect game.

He also helped the team at the plate by reaching base on all three appearances thanks to two walks and one hit, while also stealing a base to pretty much do everything he could to help the team pick up a win.

While the offense did continue to struggle overall, Edmondson gave them time to warm up in the game.

After a scoreless first 2 1/2 innings to the contest, the Warriors came to the plate in the bottom of the third knowing just one run might be enough to win the game with Edmondson being locked in the zone on the mound early.

The first two batters went down with strikeouts, but Carson Hobbs followed that with a single to start a two-out rally. After stealing second, Hobbs was able to advance to third on an errant throw before Edmondson walked to put runners on the corners.

Edmondson then picked up his lone steal of the game two pitches into Grayton Arrington’s at bat, and on another tough play for Gardendale, the shortstop had a tough time with the throw and Hobbs scored from third for a 1-0 lead after great base running from both players.

The next 2 1/2 innings featured just a combined two baserunners, as the Rockets only runner of the game reached base after a third-strike pitch with two outs in the top of the sixth got by the catcher to allow the base runner aboard and end the chance at a perfect game despite Edmondson technically striking the batter out.

He and the Warriors bounced right back in the bottom of the sixth, however, to get some insurance.

Edmondson picked up a single to lead off the bottom half of the inning. Edmondson was then replaced by AJ Bonham as a courtesy runner, and Bonham made a quick impact by swiping second base. Trey Puckett then walked to put runners on first and second with one out.

Cade Watts then stepped up to add the insurance run thanks to a line-drive single to center field that got down to allow Bonham to round third and score for a 2-0 lead heading to the final inning.

In the top half of the seventh, Edmondson got right back to it and struck out two of the final three batters, while forcing a fly out to the other to complete the no-hit win for the Warriors.

Watts finished the game 1-for-3 at the plate to pick up the team’s only RBI, while Hobbs and Edmondson picked up the other two hits.

By ALEC ETHEREDGE | Sports Editor  ALABASTER – It was another impressive outing for the Thompson softball team early in... read more