Mims came out for the third year in a row to speak to teacher Ashley Crumpton’s Career Development and Finance students. This yearly chance to encourage and inspire students to start financial planning early is his way of giving back to the community he does business in.

“I grew up in a blue collar family. My dad was a contractor. I learned what it took to make a dollar early, and that made me want to save it even more,” Mims told students as he talked them through the high points of budgeting, education planning, managing credit and the steps he took in his own career path. “Find a friend, a mentor or just someone you can ask advice of, and don’t take advice from broke people.” 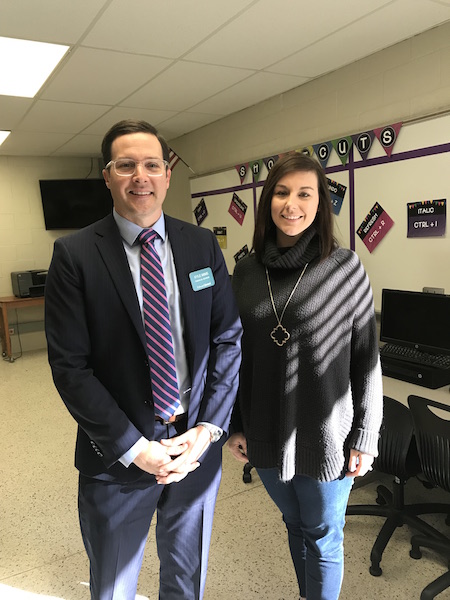 Financial advisor Kyle Mims and Finance teacher Ashley Crumpton partner up to give SCHS students a jump on their financial future. (Contributed/Sasha Johns)

Mims, a Chilton County resident and 2004 Alabama graduate, left an earlier career to follow his true passion, financial planning, several years ago. He knew early on that he wanted to practice in the small town of Columbiana and has been doing business there since 2015. He considers himself the “quarterback of financial planning” as he works in concert with other businessmen, lawyers and residents of Shelby County.

Two years ago, he was able to teach this same class in his own high school economics teacher’s classroom at Chilton County High School, and that experience opened his eyes to the deep respect he has for educators.

“We weren’t taught this stuff back when I was in high school,” Mims said, pointing out the fact that it’s only been in recent years that kids in public schools have had access to basic financial principles as part of their core education.

The partnership that Crumpton and Mims have forged with this yearly endeavor has the potential to help students. Last year Mims even had one student come by his office to ask his advice on what to do with his newfound income. Students who hear Mims’ yearly program are not only strongly encouraged to start saving as soon as they begin making an income, but they are given a few tools to help them successfully do that.