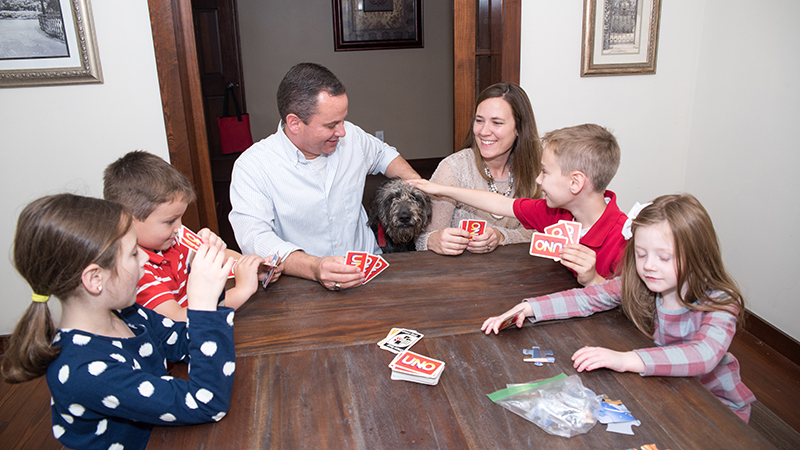 Clay and Laura Hammac live on a large farm in Columbiana with their four children and often multiple foster children. (Photo by Keith McCoy)

How the murder of a child led one man and his family to embark on a journey to make a difference.

Clay Hammac was overcome with a gut-wrenching feeling as he walked into the room in the neonatal intensive care unit at Children’s of Alabama on the night of Dec. 23, 2009.

With five years of law enforcement experience under his belt, he had already seen dozens of crime scenes more gruesome than most people can imagine, but this night was different.

Lying on the tiny hospital bed was 15-month-old Kara Nicole Lee, unresponsive and covered head-to-toe in bruises and wounds.

Hammac, then an investigator in the Shelby County Sheriff’s Office Criminal Investigation division, had received a report of a child abuse case earlier in the night from Alabaster’s Shelby Baptist Medical Center after Kara arrived at the hospital with life-threatening injuries.

Because of the severity of her condition, Kara was quickly transported from Shelby Baptist to Children’s, where doctors were working furiously to save her life when Hammac arrived to document evidence in the case.

“It really affected me. Because of the nature of law enforcement work, I had been to some really bad scenes before. This one was so much worse than everything I had experienced,” Hammac says.

As he prepared to document Kara’s injuries to use as evidence, Hammac was trying with everything he had to remain professional and do his job without losing control of his emotions.

“I grabbed my camera and went to work because that’s what we have to do. But I couldn’t help but personalize it because she was about the same age as my son was at the time,” Hammac says. “It hurt my heart greatly to think about what she had endured. Here is this innocent little helpless child fighting for her life.”

Four days later, Hammac received the call he was dreading from the nurse caring for the infant. Kara had died of her injuries after only about 450 days on earth.

Through SCSO investigators’ quick work to identify the suspect in the case, James Wesley Howard was arrested on Dec. 24 and was originally charged with aggravated child abuse. Following Kara’s death, Howard, who was the child’s mother’s boyfriend, was charged with capital murder.

Through their investigation, deputies discovered Howard was under the influence of a controlled substance while staying in a dilapidated mobile home in Shelby with Kara and her mother. During that time he attacked the child multiple times causing extensive body-covering bruising, bite marks on her shoulders and feet, broken bones in her feet, bleeding in her lower spinal cord and brain swelling.

“He confessed he was under the influence of drugs, and (Kara) was crying. It was interfering with his ability to enjoy the high, and he was trying to make her stop crying,” Hammac says, the pain in his voice still evident nine years after the tragedy. “They were living in a trailer with holes in the floor, and it was very cold at that time. This little girl was crying because she was cold and she needed comfort. “But instead of someone there to comfort her, someone was there to harm her,” Hammac adds quietly.

A jury found Howard guilty of capital murder on April 16, 2012, and one day later he was sentenced to life in prison without the possibility of parole. Today, he is incarcerated at the William E. Donaldson Correctional Facility in Bessemer.

As the days began to pass following Kara’s death, Hammac turned to the two cornerstones of his life to seek a way forward: his Christian faith and his wife, Laura. “She and I were both deeply affected by this case, and it was difficult to mask our emotions. But Laura never wavered in her support of me,” Hammac says. “Our faith is very important to us, and is the foundation of our lives. We both turned to God and prayed openly that he would heal our hearts. We prayed that somehow he would be glorified by this tragedy.”

For then Shelby County assistant district attorney Allison Boyd, there seemed to be nothing positive surrounding the case as she and her coworkers worked to prosecute Howard. “When you are in the middle of a situation like that, you can’t imagine any good coming out of it,” Boyd says. “But miraculously, it did.”

A few months after the tragedy, the Hammacs began looking into local foster care organizations, and came upon the Alabama Baptist Children’s Home. It was the answer to their prayers.

“After Kara died, I kept saying, ‘If only she had been with a family who loved her,’” Hammac says. “Because of that, we really felt foster care was where God was calling us to serve.”

After a rigorous several-month training process including home visits, background checks, CPR certification, 10 weeks of meetings and “a lot of paperwork,” the Hammacs welcomed their first foster child into their home in mid-2013.

The months of training with the Baptist Children’s Home certainly helped the Hammacs prepare for their fostering journey, but it didn’t prepare them for everything. When the first little girl arrived at their home from Jefferson County, the family loved her without restraint.

“We weren’t naïve going into it. I’m a cop, and I know what kinds of situations these children are coming from,” Hammac says. “And we also knew the ultimate objective for foster care is to re-unify the children with their biological family.”

When this girl arrived at the Hammacs’ house, she was welcomed to a bedroom decorated specifically for her, and was treated the same as the two biological children Clay and Laura had at the time.

Even knowing in advance the children may only be with them for a short while, Hammac admitted he and his wife weren’t emotionally prepared when it came time for their first foster child to be reunited with one of her distant relatives. Looking back on it, the Hammacs wouldn’t have done anything differently to help ease the pain of giving her up.

“When she left, it hurt. It left such a great void in our life because we never put up any kind of barriers,” Hammac says. “My wife and I mourned because it was like losing a child. We closed off her bedroom door for a while because it hurt too much to walk in there.

“People say ‘I could never be a foster parent because I would get too attached.’ I tell them ‘Then you’re perfect for the job,’” Hammac says. “These children need someone who will be all-in. They need to know they are loved unconditionally and whole-heartedly, even if it’s just for a short season of life.”

Working through the emotional hurt of giving up their first foster child, the Hammacs returned to a familiar source of comfort and guidance. “We prayed for God to lead us through this process, because we knew this was the mission field God had called us to do,” he says.

This time, their prayers were answered in the form of Elise Vincent, the Baptist Children’s Home director of social services for the Birmingham area. “We try to provide them as much support as possible because we know what they are experiencing (when giving up a foster child),” Vincent says. “We make sure they’re plugged into a network of other families who know what they are going through.”

One particular word of advice from Vincent stuck with the Hammacs, and has put their continuing foster care journey into perspective. “She sat us down and said, ‘God loves this child more than you do,’” Hammac says, recalling a conversation with Vincent. “That spoke such profound wisdom into our lives.”

Since then, the Hammac family has grown in multiple ways. They now have three biological children, have fostered nearly 25 children and have not stopped loving all of their children – foster or not – without holding back.

Living in a house with a family of seven or eight can be exhausting. In addition to serving as a wife and mother, Laura is also the children’s homeschool teacher. “It’s rewarding and exhausting at the same time,” Hammac says. “My wife is the real hero in this. She is able to fill so many roles with such tenacity.”

And in 2016, Clay and Laura decided to add one more role to their lives.

It’s June 23, 2016, and the usually regal, sterile and businesslike courtroom inside the Shelby County Courthouse is anything but.

The Hammacs’ friends and family members fill the space typically reserved to conduct serious legal hearings as items such as princess crowns and clown noses adorn several of the attendees.

About two years after welcoming a newborn girl into their home through the Baptist Children’s Home foster program, the Hammac family is about to make her stay at their house permanent.

As the result of months of paperwork, working with the Department of Human Resources and navigating the judicial process of terminating the parental rights of the girl’s biological parents, the Hammacs are ready to celebrate the adoption of their youngest daughter.

“It’s one of the most precious stories in all of this. She is the light of our family, and she completes our home. She’s a daddy’s girl for sure,” Hammac says, flashing the genuine smile of a proud father. “It’s just a beautiful success story.”

For Boyd, who is now the Shelby County Probate Judge and was presiding over the adoption hearing, the day represents a full circle from working with Hammac on the Lee death case several years earlier.

“It does everyone’s hearts good when you see someone take something so negative and make it a positive, and I definitely think the Hammac family did that by becoming foster parents and adopting one child after the (Lee) case,” Boyd says, recalling the event. “This (adoption) was so special. It was such a happy day. She wasn’t just getting adopted into the Hammac family, she was getting adopted into an entire support network.”

As with most adoptions, Boyd has created a party-like atmosphere in the courtroom to celebrate a growing family and a chance for a little girl to have a much better life than she may have otherwise.

“We want to make sure the parents and children are at-ease,” Boyd says. “They’re always worried that something is going to go wrong at the last minute, and I tell them, ‘You would not be in this courtroom right now if all the Ts were not crossed and all the Is not dotted.’”

Now as a family of six, the Hammacs have no intention of moving away from the foster world, and are usually caring for at least one foster child year-round.

Despite the family’s objection to having praise directed toward their actions, they have certainly earned plenty of kind words from those who know them.

“Their focus has always been on their family. They always make sure they are including all of their children in the community, they are still actively working as foster parents and they do everything they can to make sure others know about the foster program too,” Boyd says.

“They are a wonderful family that is definitely worthy of the highest recognition,” Vincent adds.