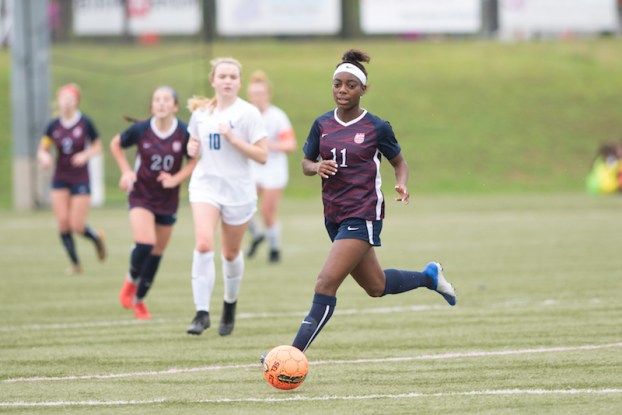 Nicole Payne, above, was one of two players to pick up a hit trick for the Oak Mountain girls in a 12-0 area victory against Tuscaloosa County on Wednesday night.

TUSCALOOSA – Both the Oak Mountain girls and boys soccer teams are ranked inside the top five of the Class 7A soccer standings, and on Wednesday, Feb. 27, both showed why as they kicked off area play by beating Tuscaloosa County by a combined 22-0 to pick up their first area wins of the year.

For the girls, the scoring came early and often, and it started less than five minutes into the game when Emmi Long chipped a pass ahead to the speedy Nicole Payne, who buried her shot into the back of the net for a 1-0 advantage.

Over the next five minutes of play, the Eagles got several more opportunities and eventually took advantage of a corner kick when Long was able to find some open space before ripping a shot into the back of the net for a 2-0 lead in less than 10 minutes of play.

After being called offside on another goal less than a minute later, Oak Mountain eventually made up for it shortly after when Danielle Retief found the back of the net for the first time giving the Eagles a 3-0 advantage less than 15 minutes into the game.

And the margin got even wider shortly after that when Retief became the assister on a pass to Payne, who put her second goal of the game on the board 16 minutes into the contest for a 4-0 lead.

The beautiful passing continued shortly after that when Hallie Campbell was able to find Retief, who then buried her second goal of the game into the back of the net for a 5-0 advantage with 23 minutes left in the half.

The Retief to Payne combo got back to work after that, as Payne picked up her hat-trick goal to make it 6-0. That was followed shortly after by a goal from Hayley Wells, before Retief put her hat-trick goal in the back of the net for an 8-0 lead with time still left in the first half.

Less than three minutes later, Long added her second goal of the game to make it 9-0 with a few minutes still left in the half. It only took a minute for Kaitlin Maynard to add the 10th goal.

Tuscaloosa County still had the rest of the half to try and prevent the 10-goal rule, but instead Abby Gaut and Kiersen McDonald were able to score two more goals before the half ended to pull off the 12-0 mercy-rule victory.

While it took two halves for the boys to finish off the game, the outcome wasn’t much different.

Less than six minutes into the game, John Long kicked off the scoring with a beautiful shot to put the Eagles on top 1-0.

While it looked like they may start with the same rapid fire the girls did, that lone goal was the only one on the scoreboard for the first 25 minutes of the game.

Long, however, was determined to add another goal and off a beautiful pass from Cody Wells into the box, Long was able to add his second goal of the game to give the Eagles a 2-0 advantage with 13 minutes remaining in the half.

That seemed to lift a weight off the Eagles shoulders.

Six minutes later, Logan Dunaway was able to find some open space for a good shot to put Oak Mountain on top 3-0.

It didn’t take long for Wells to pick up another great pass to help extend the lead.  He found Bryce Bickel on a cross that ended in a goal for the 4-0 lead heading into the halftime break.

Wells’ assist game may have been the biggest highlight of the night, and he continued helping his teammates out in the second half.

Three minutes into the half, he found Long on a nice ball, which allowed Long to put his hat-trick goal into the back of the net for a 5-0 Oak Mountain advantage.

With about 25 minutes left in the second half, Wells continued his stellar night by finding teammate Patrick Guffey to make the score 6-0. Shortly after, that duo flipped positions, as Wells found the back of the net on a nice pass from Guffey to make it 7-0 Eagles.

Wells then added a second goal with 13 minutes left in the game after a header eventually found its way past the Keeper for an 8-0 advantage.

Involved in nearly every scoring play, he then proceeded to find Ben O’Neil for the Eagles’ ninth goal of the game with eight minutes left to play.

Shortly after, Guffey closed the game out by firing a free kick into the back of the net for the mercy-rule goal to lead Oak Mountain to a 10-0 road win.

By ALEC ETHEREDGE | Sports Editor VERBENA – Despite picking up just five hits, the Montevallo Bulldogs were able to... read more