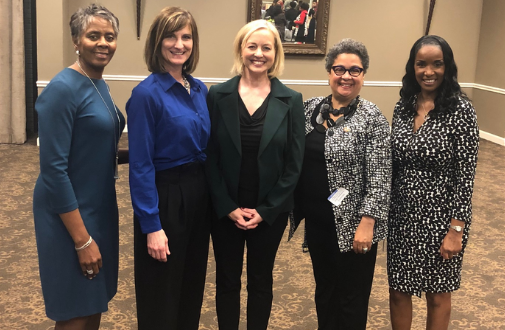 PELHAM – More than 140 women, representing more than 20 municipalities and counties throughout the state, gathered to network and take advantage of educational opportunities offered at the inaugural Women Leading Government conference held at the Pelham Civic Complex on Monday, Feb. 25.

Alabama’s newly formed Women Leading Government is a sister organization to the International City and County Management Association, perhaps the most respected organization in the governmental management industry.

The theme of the conference, “Leading with Character and Confidence,” aligned with the mission of Alabama’s WGL chapter, which is “to encourage women to pursue careers in local and state government, and through networking and education, help prepare women for success in the unique local government communities across our state.”

DiFante, chapter organizer, visited with Gov. Kay Ivey in Montgomery prior to the conference and shared the mission and plans for the state chapter. In a letter Ivey asked to be read at the conference, she commented, “Many of you did not plan for a career in local government. In fact, like me, your path was not predetermined or even perhaps likely.”

The governor’s letter went on to describe growing up in Camden at a time and in a place where little girls didn’t dream of becoming governor one day.

“Gov. Ivey was an inspiration to me as I made the decision to leave New York State after 28 years and come back home to Alabama to serve as its only female city manager,” DiFante said. “When Cheryl Kidd and I began researching the WLG national organization and spoke to chapter presidents in Arizona, Colorado, Arkansas, California and Texas, they all encouraged us to simply start a conversation and people would show up hungry to talk about how women could work together to make an even greater impact in their communities.”

DiFante said feedback from conference attendees has been overwhelmingly positive. Prior to the conference, she said she received an email or text every other day from women thanking us for starting this conversation, and since Monday, the appreciation has kept coming in.

“Women want to share their passion for serving in their communities with young girls to encourage them to pursue careers in local government,” DiFante said. “One of the most impactful responses I received after the conference was from a woman who told me she was going to ask a man to mentor her for the first time. The importance of working in concert and collaboration with our male teammates was an important aspect of the conference.”

Alabama WLG is a partner organization to The Alabama City/County Management Association, which also served as a conference sponsor.