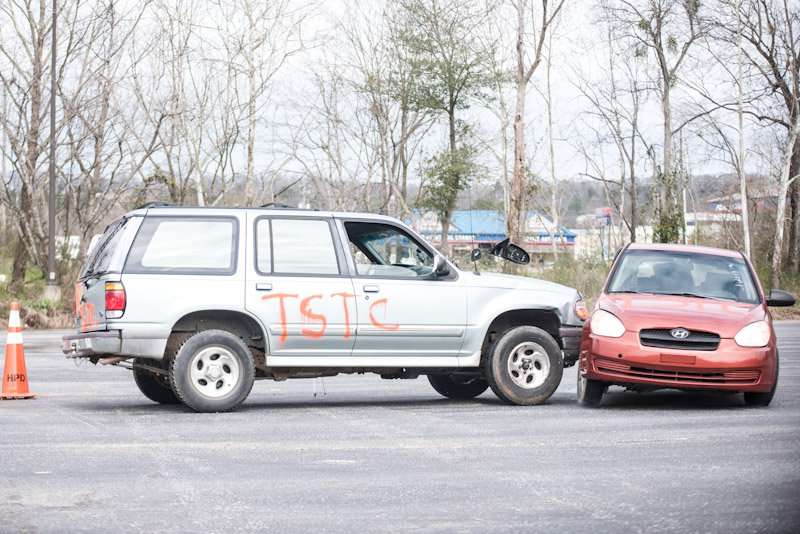 The aftermath of the live crash test performed by Dale Smith of the Traffic Safety Training Center. (Reporter Photo/Keith Mccoy)

PELHAM — Police officers from Pelham and around the Birmingham area participated in a live crash test demonstration Feb. 26 as part of a program to train officers in collision reconstruction and investigation.

The demonstration took place at the Pelham Civic Complex and was hosted by the Pelham Police Department in coordination with the Traffic Safety Training Center as part of a two-week training course for traffic unit officers.

During the crash test, Smith drove a vehicle at approximately 30 miles per hour into the side of a parked car to simulate a real collision. The officers present then used the skills they learned in the training course to examine the situation.

Collisions often result in those involved being incapacitated or fatally injured. This means that officers must be ready and able to put together the events that transpired solely based what they find at the scene.

According to Smith, this knowledge is important because “it can answer if someone did something criminally, likewise it can protect someone if they didn’t do anything wrong in a collision.”

“Basic math can give us speed calculations, feet per second, miles per hour and kinetic energy,” he said.  “We can then place that in formulas and put everything back together to get the accurate number of the lowest possible speed they could have been going in order to pursue the case.”

Smith said that the officers in his courses were understanding the concepts well and that they “had come a long way in the weeks that I’ve had them.”