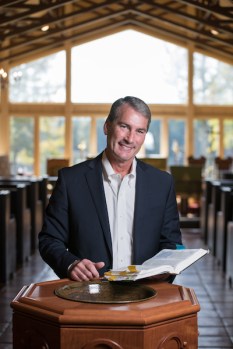 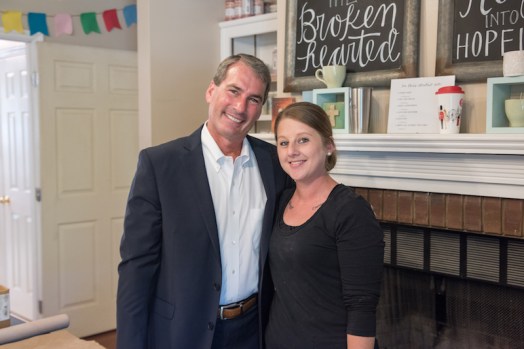 Lew Burdette visits the studio of Prodigal Pottery, a part of King’s Home that teaches job skills to women who are escaping domestic abuse. 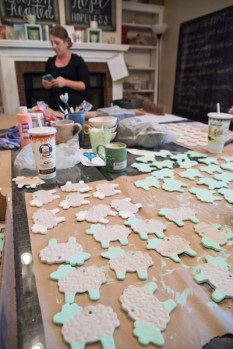 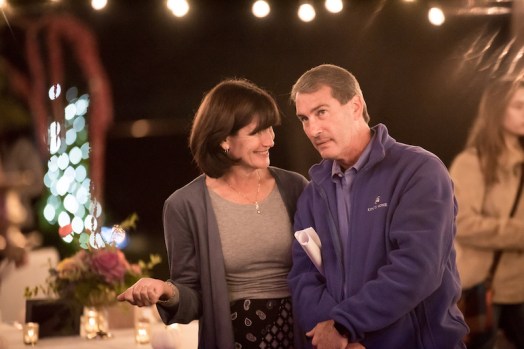 Burdette's involvement at president of King's Home carries over into Prodigal Pottery, fundraiser events and more. 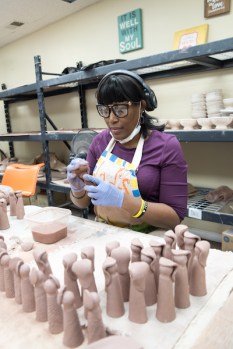 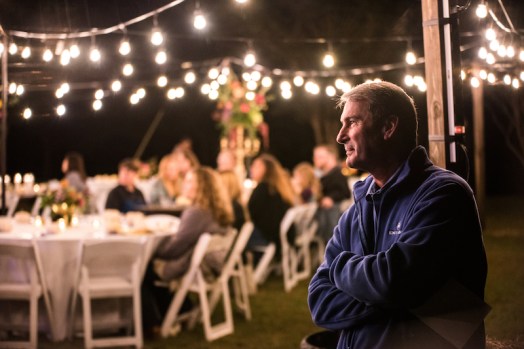 This road to leading to King’s Home was paved with a gruesome share of suffering for this leader.

As Lew Burdette sits in a sun-drenched chapel preparing to reflect on his years serving as the president of King’s Home in Chelsea, his own journey from darkness is still not far from his mind.

It all started on Dec. 27, 1974—a date Burdette wishes never existed. It was a cold Friday night when the 15-year-old was finishing up a shift at his father’s grocery store in Roanoke, a small town in East Alabama. It was there he’d learned a strong work ethic from his dad, sacking groceries from the time he was old enough to physically lift them off the counter.

That night he was allowed to leave work a little early because he had a date with a girl from a town nearby. But when he stepped outside the door, two men confronted him near a back alley and followed him out into the street, pulled a gun and forced him into their vehicle at gunpoint.

“It happened that fast,” Burdette recalls. “Off we go and the crazy thing is that I knew who they were. They were from the same town, and I thought that because I got a date with a cheerleader that they’re going to give me a good whipping for coming into their town and having a date with one of their friends.”

Before long, the duo was demanding a $250,000 ransom by that night. Burdette knew that no small-town grocery store owner would have that much money sitting around.

As the car continued to make its way further and further away from Roanoke, the two men continued to quiz Burdette about the money until the vehicle made its way to the remote part of Randolph County about a mile down a dark dirt road.

They then parked and ordered him out of the car at gunpoint through thick brush and briars. The story only gets more graphic from there. The men bashed his head with the butt of the gun and then stabbed him once in the chest and three times in the back before dumping him into an old water well. “I fall to the ground and within seconds they slam their fist into my chest and immediately I feel this sharp piercing pain and blood spilling out over my stomach,” Burdette says. “At this time, I’m in complete shock because I really didn’t think they were going to hurt me.”

Just when he thought they were done, the men dropped pieces of boulders and foundation on him to try to cover him up and then shot down the well one time, two times, three times, missing him before hitting the back of his head on the fourth try. Then they left him to die.

Facing shock, excruciating pain, blood loss, weakness and more, the odds of Burdette finding his way out of a 30-foot water well in the freezing cold and darkness were not good. After more than two hours of trying to escape, he was overcome by waves of despondence, deep sadness, anger and questioning God, while also reflecting on all the good things in his 15 years of life—and the reality that his life could end here. The one thing that kept him going, though, was his faith.

“I reflected on the importance of that, and I was thankful that I was going to be in heaven and coming to terms with that,” he recalls. Verses he had to memorize as a kid in Bible memory class came to mind. He recited them aloud, he sang songs, he prayed. When he got to the fourth verse of the 23rd Psalm, he paused. “Even though I travel through the valley of the shadow of death, I will fear no evil because you’re with me,” it reads. “When I got to that verse four, it was like this peace came over me. I knew God was with me and that it was going to be OK,” he retells.

What happened next was nothing short of a miracle. After going in and out of consciousness while chest-deep in water, Burdette was on the verge of drowning. One time he went down gasping for air, his hand reached up and found a hole on the side of the well. “I was praying like crazy, ‘God is there any way I could pull up and maybe get my foot in that hole?’” Burdette says. “The chunks and blocks they threw gave me enough space out of the water to get my foot in that hole. I was praying, ‘Please give me the strength,’ and he does.”

At the time, he couldn’t even sit up straight, but he worked his way up the sides of the well only to find an old, rusty box spring covering the opening of the well. “All I could think to do was lunge as far as I can, and I’m going to wrap my arms in that old box spring and hang on and that’s what happened,” Burdette says.

With minimal strength, he was forced to crawl for two hours while blacking in and out of consciousness until he finally stumbled upon an old wooden shotgun house just at the moment when he says he couldn’t make it another inch.

A few minutes later, he was crawling up to a pot belly stove to warm his body when the two men who attempted to kill him opened the door. As it turns out, he was in the home of one of their grandmothers. “Those are the guys that tried to kill me!” he screamed. But as soon as he said it, they turned and ran. Relief flooded Burdette.

Upon arriving at the hospital, doctors told Burdette’s parents that he had about a 5-10 percent chance of making it through the night. But he had no pneumonia and no infections. And he came home in less than two weeks. “It was just a miraculous recovery,” he recalls. “My mom being the faithful woman she is, there were prayer chains put all over. I got letters from all over and even one from the governor at the time.”

Both kidnappers received a 29-and-a-half-year prison sentence but were released from jail after just two and a half years. Burdette doesn’t begrudge that looking back though. “I felt like they did their time, and I never really had any animosity toward those guys,” he says. “I thought they were young and stupid and got in a situation that they didn’t really want to be in.”

From there Burdette’s life followed a nice, clean script. He got a finance degree from the University of Alabama and served as director of Christian education at First United Methodist Church in Florence before working for Books-A-Million for 13 years. He went on to open Kindred, a Christian retail store in Birmingham, in 1998, but was forced to close in 2001.

That’s when he found his way to King’s Home. “I ended up having to liquidate, and the attorney helping me sort of unwind those stores says, ‘Hey Lew, there’s going to be an opening at King’s Home, and I have no idea if you have an interest in anything like that.’ But man, God stirred my heart immediately. I just knew that was going to the next season of life for me professionally, and they hired me to come in as president.” That was 16 years ago.

Day to day, Burdette leads the King’s Home staff to serve youth, women, mothers and children seeking refuge, hope and help from abuse, neglect, abandonment, homelessness and other extreme and impoverished conditions from six campuses across four counties. When he says he can understand pain and suffering someone is going through, he truly says it with meaning. “I know what it’s like to experience trauma and pain, and I know what it’s like to feel like you’re going to die at the hands of somebody else, and that’s what some of our youth and some of our moms have experienced over and over again,” Burdette says. “We’ve picked up moms escaping domestic violence from emergency rooms from all over Alabama with faces completely disfigured, and one mom had her arm blown off and should’ve died if it hadn’t of been just a miracle.”

King’s Home offers a youth program as well as a program for women, mothers and children. Many have found themselves homeless from the devastating effects of abuse and domestic violence. “We operate safe, loving homes, and we hope that every day we set the table with safe, loving homes where youth and moms and kids can find hope and opportunity, and healing from that abusive past,” Burdette says. “Ninety-eight percent of our residents experience really horrible abuse, and they just need a chance to start over. They need a way to heal and find hope in life.”

It’s that message of hope in darkness that Burdette both knows firsthand and preaches decades later: “Life doesn’t have to be like where they came from and what they experienced, and that’s what we share every day. That’s really my bond because I grew up in a very loving and safe home, but I did have a traumatic experience that involved a lot of pain and suffering that was horrible and life-changing in my life.”