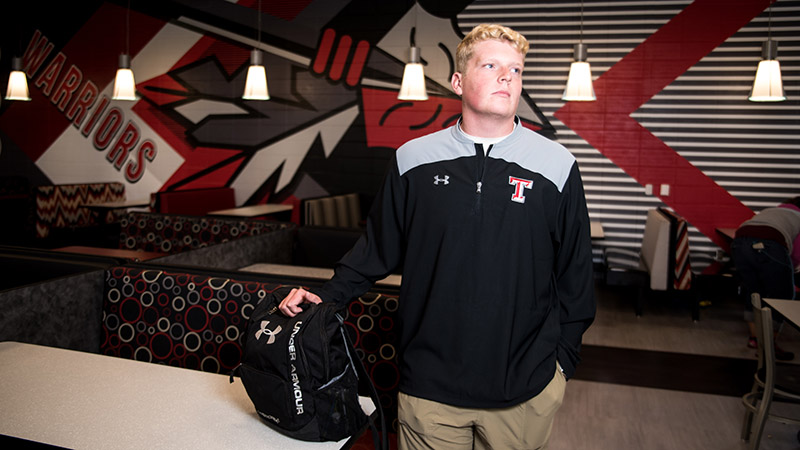 He’s setting the bar for impacting the community—and he’s only a high school junior.

Noah Tanner rushes through the double glass doors leading from the main stairway in Thompson High School to the building’s rotunda. At most, he’s a minute late for his 8 a.m. interview appointment. “Sorry I’m running late. It’s been a pretty busy morning,” says Tanner. Dressed in athletic shorts and his Thompson Warriors football warmup jacket, he takes a swig of the sports drink in his hand before continuing. “I’ll find us a place to meet.”

Tanner greets several people as he walks down the school’s hallways—students and teachers, it makes no difference—with a confident wave and smile. He reaches a set of conference rooms on the second floor of the main academic building and inquires about a vacancy as a THS employee points him to a room on the northeast corner of the school.

As he sits down to talk about his life, Tanner shows few signs he has already gone through a rigorous football practice earlier in the morning after being up late working at the YMCA the previous night.

As a junior, Tanner has a presence on campus typically reserved for the senior star quarterback of a football team, and is far more involved in local happenings than many adults are. “I try to think of myself as a regular high school student,” he says, knowing he is anything but. “I just try to be as involved as I can be. In a small town like Alabaster, you have a chance to touch a lot of people and really make a difference.

“I think you have that kind of personality instilled in you when you grow up here,” he adds.

As he explains his community involvement over the past several years, it starts to become clear there are few youth-oriented offerings in Alabaster he hasn’t played a role in.

A Heart for Others

It’s a mild fall day in October 2015 as the scene outside Thompson Middle School resembles a carnival complete with miniature golf, arts and crafts, inflatable games and more. Tanner, then in eighth grade, shows expert-level event management skills as he quickly but calmly makes the rounds to the different stations set up in the large grass field adjacent to the school.

After ensuring everyone has what they need, he takes a break to speak with local media about the school’s second-annual fun day for students with special needs, which he had successfully organized and implemented for the second-straight year.

Quick to point the spotlight away from himself, Tanner, only 13 at the time, demonstrated the sophisticated humility he still shows to this day. “It’s very reassuring to see how many people stepped up to make this happen,” he says. “It’s good to see everyone coming together to make Fall Day a success. We are trying to get more seventh-graders involved so they can continue the Warrior legacy.”

Tanner and his team organized the middle school fun days for their peers with special needs on their own accord without prompting from any of the school’s teachers, which came as no surprise to Alabaster City Schools’ Coordinator of Secondary Education Dr. Keri Johnson. “He has a heart for other people. It doesn’t matter who they are, if they have special needs, he treats everyone the same,” Johnson says. “He genuinely understands the way things operate, and he is never too busy to help someone.”

Tanner certainly could use the “too busy” excuse if he wanted to. A little more than a month into his 10th-grade year at THS, Tanner was involved in the Alabaster Teen Council, Leo Club, Beta Club, HOSA Future Health Care Professionals, Peer Helpers and Leadership 300. He was also an offensive lineman on the Warriors’ football team and worked after school at the Greystone YMCA.

In the classroom, he was in a dual-enrollment pre-calculus program and was taking Advanced Placement biology and history at the same time – all three of which could allow him to earn early college credit. “It’s a lot of time management, some days more than others,” Tanner says with a laugh. “I’ve learned sometimes you have to say no or limit yourself, especially because schoolwork always comes first, then your extracurriculars.

“It’s something that comes naturally to me, and I’ve got good support at home,” he adds. “I’m so glad both of those things are true, because I couldn’t do it otherwise.”

One organization has opened more doors for Tanner than all the others combined, although his beginnings with the group didn’t start out so smoothly. In fact, Alabaster Mayor Marty Handlon, who organizes the Alabaster Teen Council and chooses its members each year, still uses Tanner as a humorous example of what not to do.

“After the kids have been chosen, we have an organizational meeting with them where we say ‘OK, this is what you’ve signed up for,’ and then we ask them why they wanted to be on Teen Council,” Handlon says, recalling Tanner’s first Teen Council meeting when he was a high school freshman. “Noah was the first one to answer, and he said, ‘Because it looks good on a college résumé.’ I kind of used that as a teaching moment to say ‘OK, let’s be clear that this is about more than just padding your résumé.’”

Handlon looks back on the exchange fondly today, especially since Tanner began setting the standard for other members of the Teen Council almost immediately after he got involved.

For the past few years, the Teen Council has served as a bridge between the city’s youth and City Hall, and regularly works with city leaders to offer feedback and organize kid-friendly events. “From that initial interview on, he has been a leader. He has used all of his gifts and skills to set an example for his peers,” Handlon says, noting Tanner is now in his third term of service on the all-volunteer Teen Council. “He has really come into his own. He is selfless, and he has a true servant’s heart.”

While with the Teen Council, Tanner has worked with the other members to organize events such as summer movie nights at Larry Simmons Stadium, summer slip-n-slides, back-to-school bashes and charitable work such as preparing and serving meals for those in need at Thanksgiving. The group has also organized teen-focused mental health awareness events and helped organize a citywide health fair in 2018.

Tanner officially serves in a public relations role for the Teen Council, ensuring word about the group’s events reaches a large audience, but it’s not uncommon to see him setting up tables, carrying large boxes and performing a variety of other tasks during Teen Council events.

When setting up for the city’s health fair, Johnson, who had injured her ankle shortly before the event, spotted Tanner and asked if he could help her carry some items up the stairs. “They carried the boxes for me, set everything up, and Noah came back and checked on me several times throughout the day,” Johnson says. “He is very much in-tune with his strengths. He has a servant’s heart, but he’s also a great leader because he’s got a personality that makes people want to help him.”

When Tanner decides he wants to take on a project, he never does so half-heartedly. If he doesn’t know how to make something happen, chances are he knows someone who does.

“What he needs from us (the school system) is usually minimal, but it’s not something a kid would necessarily have access to,” Johnson says. “He is super easy to support, because by the time he comes to us, he’s usually thought out the logistics of whatever he is doing.”

At only 16 years old, the list of events Tanner has helped organize is impressive. In addition to a bevy of Teen Council-related events, Tanner also organized swim lessons for local deaf and hard of hearing students at the Alabaster YMCA in 2018. “To my knowledge, that’s the only event of its kind in Alabama and possibly the Southeast,” Tanner says of the swim lessons, noting the idea came to him in the middle of the night and was quickly jotted down on his phone. “The need was definitely there, and we try to meet a need whenever it’s presented.”

Given Tanner’s track record of careful planning and forward thinking, it’s no surprise he already has his future career path laid out. It’s also no surprise his career choice will focus on helping others. “I’m planning to go into a pre-med and emergency med major,” he says. “I’ve always wanted to help people, and what better way to do that than to be there for people on the worst day of their lives? It’s one of those jobs that often gets overlooked.”

Tanner is approaching his future career field in the same manner he approaches most things in his life: by going all-in. ”He’s always loved broadcast journalism, but after he got to the high school, he realized it made more sense for him to go into the medical field,” Johnson says, noting Tanner recently toured the Shelby Baptist Medical Center emergency department with other members of the Teen Council. “He has taken it upon himself to learn everything he can about the medical field and if it’s something he would be interested in pursuing.”

When asked to sum up Tanner’s best quality in one phrase, Johnson didn’t hesitate. “He is very self-aware,” she says. “That’s not a quality you see often with kids that age.”