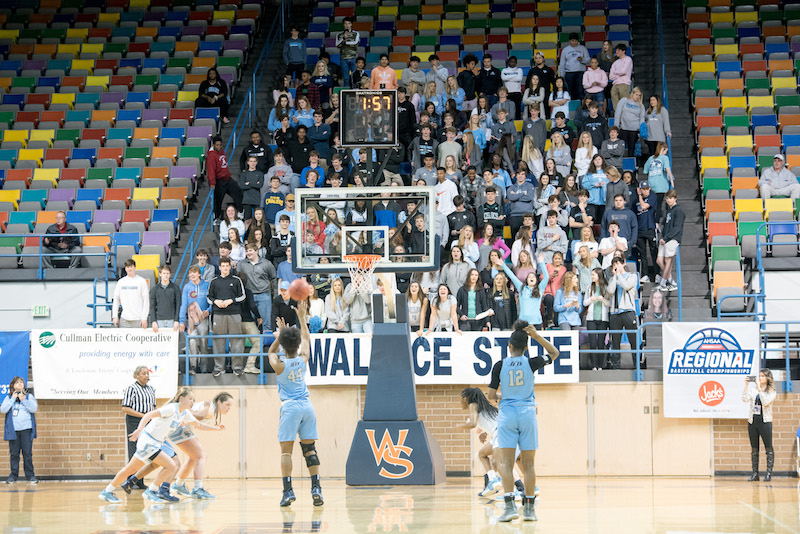 We’re always told “Patience is a virtue,” but when that saying originated in the poem Piers Plowman written by English poet William Langland, the idea of basketball hadn’t been conceived.

There is an ageless growing debate every season as to whether or not the high school game should have a shot clock similar to that of both the collegiate and professional level of the game.

As time goes by, people evolve, games evolve and it’s past due for the high school basketball game to adapt to such an obvious and necessary change.

Currently, there are eight U.S. states that use a shot clock at the high school level, which goes against the National Federation of State High School Association’s rule.

I’ve always quietly supported the addition of the shot clock thinking it just makes too much sense not to do, and would create much more action and scoring opportunity, but after seeing a video on Twitter posted by Chris Renkel of CBS 42.

This video started with an offensive player dribbling the ball just across the half-court line with 6:31 left in the fourth quarter and her team leading by a slim margin of five points.

What had been a tightly-contested sub-regional game all of a sudden made me cringe as the team with the ball held it in that same position for 2:27 of game time before even moving the ball.

Then ensued the passing and dribbling extravaganza that everybody expecting action in a basketball game wants to see in the final four minutes of a postseason game with seasons on the line.

The possession went on to last for 3:28 of the fourth quarter—that’s almost half of the eight-minute quarter, and get this, it ended in a missed layup.

As a fan of the game, it was embarrassing for the sport of basketball to see that.

I posted those exact words in a Tweet and was met with some positive feedback, but also got some preposterous flak from a few people giving the same suggestions of “they should play defense,” “that only happens when other teams allow them to do it,” and then one person even compared it to soccer and hockey saying they don’t use it in those sports and they’re fine.

Are you kidding me? We’re now comparing basketball to soccer and hockey.

The reason those sports are lower scoring and don’t use a shot clock is because scoring is at much more of a premium with someone literally guarding the goal, and there is no such thing as a back-court violation in either sport. It’s also much more difficult to hold the ball or puck for long periods of time in either of those sports without the other team touching it.

Imagine watching a college or professional basketball game where a team holds the ball in the front court with no shot clock and just passes the ball around for five minutes of the half or quarter.

We’d have final scores of 8-4, and the sport would cease to exist.

I understand the “play defense” argument slightly more because you should always play defense as hard as possible.

But one, you shouldn’t have to guard at the half-court line with 6:31 left in a five-point game because you may not get the ball back. Two, you can’t expect a defense to press for that long to eventually force a five-second violation or turnover.

That just completely tires out the team and takes away from their ability to score on the other end, which is what would make a close game exciting down the stretch.

Another person said “passing the ball is a true basketball skill and requires commitment, determination and hours of practice as a team. Shooting, passing, rebounding and playing defense are all skills. A shot clock is not needed in high school basketball.”

So am I to understand that implementing a shot clock will take away from the skill of passing?

Am I the only one that can’t wrap my mind around that thought process?

If anything, adding a shot clock will have to make you be even sharper at doing each thing mentioned in that quote to get to the end goal of getting the ball through the basket.

None of that sounds like a bad thing to me. And quite honestly, I think it would be more fun for the athletes to have that addition to give them a goal and make it feel more like the sport at every other level of competition after high school.

The only logical argument that makes it difficult is hiring somebody to run the shot clock, as officials are already under paid, but there is definitely a way to make that feasible.

For the most part, the high school game is in fantastic shape and continues to improve each season. I thoroughly enjoy spending two or three nights a week watching and covering games.

But, at the end of the day, I’m all about improving the game, and a shot clock would do that.

Some coaches will agree with me and some will disagree, and that’s OK. I understand the strategy side of it, and taking advantage of it if you have the lead.

Every possession ends with either a made or missed shot, and we could get to that outcome quicker and with more excitement with the addition of a shot clock.

It will create more shots offensively, and more strategy with plays designed on scoring. High school athletes are more athletic than ever and coaches know the game better than ever, meaning a good shot can easily be taken within 30-45 seconds.

It’s time for the high school game to evolve and catch up with the times by adding the shot clock.