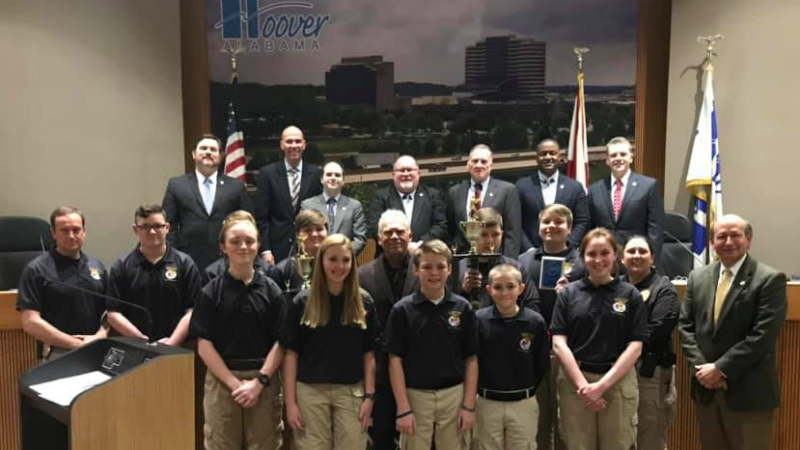 The Hoover Police Explorers are recognized at the Hoover City Council meeting on Monday, March 4. (CONTRIBUTED)

HOOVER – The Hoover Police Explorers were recognized during the Hoover City Council meeting on Monday, March 4, for their performance at recent competitions.

Hoover Police Chief Nick Derzis called the Explorers to the front as he talked about their success.

At the Alabama Explorer competition in Montevallo in November 2018, the Hoover team earned seven total trophies competing in nine events.

Then, on Feb. 9, at the Boy Scouts of America winter competition in Gatlinburg, Tennessee, eight Hoover Explorers competed against more than 3,000 of their peers from more than 100 law enforcement explorer posts in four team and eight individual events.

The Hoover team was one of the few that included club members, Derzis said, which are participants who are still in middle school.

Explorers range in age from 14 to 21, Derzis said.

With each event averaging 20-30 participants, the Hoover Explorers took home the second-place trophy in the burglary in progress team event and ninth place in the officer down team event.

“As you can see, very, very, very knowledgeable group,” Derzis said. “I know that our advisors spent a lot of time educating these kids…In the future, some of these guys could be here holding up their right hand and become Hoover police officers.”