Briarwood picks up area shutout at No. 4 John Carroll 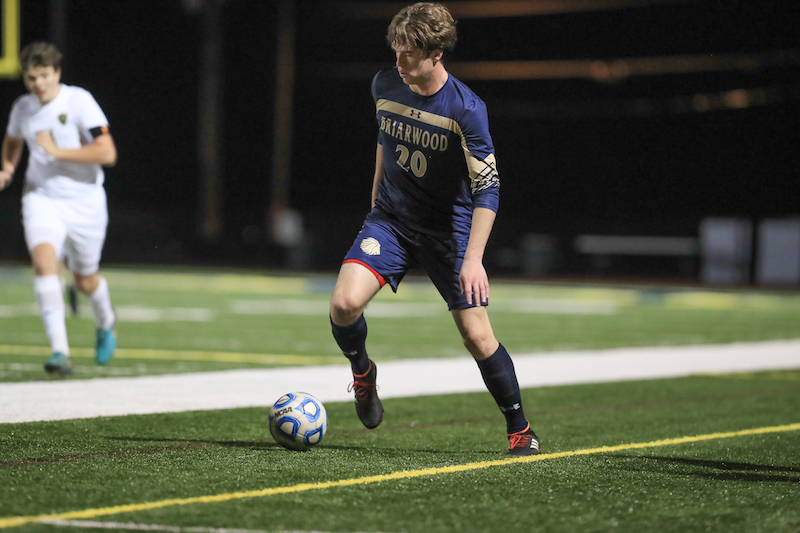 Briarwood’s Logan Frost, above, scored his 99th career goal against John Carroll to lead the Lions to a 3-0 victory. (For the Reporter/Dawn Harrison)

NORTH SHELBY – The Briarwood boys soccer team came into the 2019 season as an obvious favorite to win the Class 4A-5A State Championship this season after losing in the title game the last two teams but returning several star players.

Being the favorite and proving it on the field are two different things, but so far the No. 1 ranked Lions have lived up to the hype after picking up their seventh win in a row and second area win of the season on Tuesday, March 5, when they took down No. 4 John Carroll 3-0.

Right now, Briarwood’s only blemish is a 2-2 tie against 7A Fairhope in its second game of the season. Since then, the Lions have won those six games in a row without allowing a goal, outscoring opponents 25-0 in that time span. So far this season, Briarwood has only given up those two goals and has outscored their nine opponents by a combined 36-2.

This game was no different despite a slow start.

With temperatures near the freezing mark, both teams started the game out slowly trying to warmup, and with less than 10 minutes to go in the opening half of the game, the Lions weren’t just warm, they were on fire.

It started with the first goal with 7:17 remaining, which seemed to spark the rest of the team.

Up 1-0, one of the best goal scorers in the state was able to add a second goal for Briarwood before the half ended.

Logan Frost, who is a University of South Carolina commit, came into the season close to the 100-goal mark at BCS, and with 2:20 to go in the first half, he got one step closer by burying his 99th goal into the back of the net putting him one short of that historic mark.

Frost’s goal, more importantly, gave the Lions a 2-0 advantage at the half as they looked to pick up their second area win after taking down Montevallo a week earlier.

The scoring onslaught in a short period of time picked right back up in the second half. Two minutes into the half, Braxton Tubb got in on the action by putting the third and final goal on the board for Briarwood.

With a defense that hadn’t given up a goal in six games, the 1-0 lead the Lions had in the first half was probably enough, much less a three-goal lead.

Briarwood’s defense continued its suffocating effort throughout the final 35 minutes of the game to complete its seventh consecutive shutout and pick up the 3-0 win.