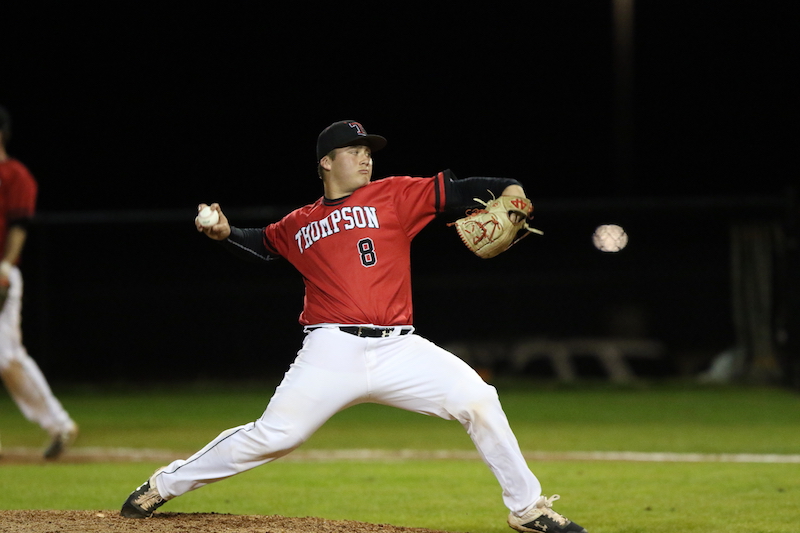 Thompson's Breydon Edmondson tossed his second complete-game in a row and helped lead the Warriors to a 5-1 victory against Mountain Brook. (For the Reporter/Eric Starling)

MOUNTAIN BROOK – On a frigid night with temperatures dipping into the 30s, Thompson’s Breydon Edmondson had no trouble warming up on the mound, while the Warriors bats warmed up at the perfect time scoring four runs in the final three innings to pull away for a 5-1 road victory against the Mountain Brook Spartans on Tuesday, March 5.

Edmondson, who is already 2-0 on the season, was coming off two dominant starts and picked up right where he left off by tossing another complete game on 97 pitches. He allowed five hits and three walks on the chilly night, but just one run crossed the plate, while he struck out six batters he faced.

He was accompanied by impressive games at the plate from Cade Watts and Grayton Arrington in the batter’s box. Watts went 2-for-3 with two RBIs, while Arrington was 2-for-3 with one RBI.

Early in the game, it was clear the cold afternoon was having an impact on each team at the plate with just one run from each team through the first four innings.

After two scoreless innings to start the game, Thompson took the first lead of the night in the top of the third with one swing of the bat. On the first pitch lead-off hitter Carson Hobbs saw, he drove it deep to left field and over the wall for a solos shot to put the Warriors up 1-0.

The Spartans failed to answer in the bottom of the third, but that quickly changed an inning later.

Mountain Brook was able to string together a two-out rally that featured two doubles and a single to drive in the game-tying run and even the game through four innings.

The Warriors, however, quickly answered back in the top of the fifth.

After a quick strikeout to start the inning, Edmondson and Arrington reached base by way of walk and a single, respectively, to put two aboard. Both advanced into scoring position on a passed ball during the next at bat, before one batter later Watts singled to right field to drive both in for a 3-1 lead.

The Spartans added two base runners in the bottom half of the inning, but never put a run on the board which became key with what Thompson did next.

The Warriors came back to the plate looking to build off of their best inning of the game, and saw the first three runners reach base in the top of the sixth thanks to a single from Will Kies and walks from Hobbs and Nick Freeman.

One of those runs crossed the plate on a fielder’s choice from Edmondson before Arrington singled on a line drive to left field to drive in Freeman for Thompson’s fifth and final run.

Edmondson allowed just one more base runner the remainder of the game as that four-run cushion became more than enough to allow the Warriors to improve to 4-6 and win their second in a row after three losses over the weekend.

Aside from Watts and Arrington, Hobbs, Josh Mehmen and Kies all picked up hits with Hobbs and Edmondson picking up the other two RBIs.