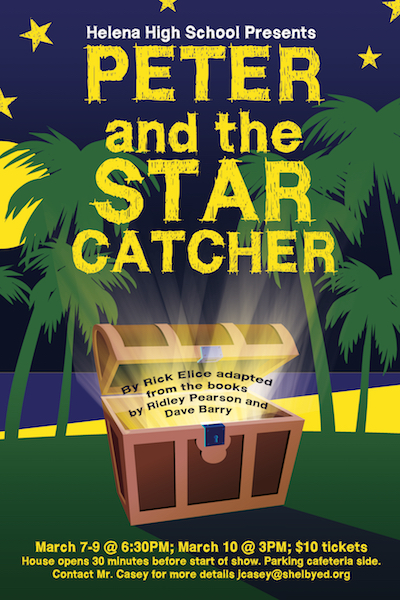 HHS will present "Peter and the Starcatcher" March 7-10 as the cost is $10 per ticket. (Contributed)

HHS to present ‘Peter and the Starcatcher’ March 7-10

HELENA – The Helena High School music and theater department will be presenting its spring show beginning March 7, as parents, friends and members of the community will have four different opportunities to see the production at HHS.

The cost per ticket is $10 at the door for general admission.

Peter and the Starcatcher is described by MTI publishing as “The Tony-winning play, based on the best-selling novels, upends the century-old story of how a miserable orphan boy becomes the legendary Peter Pan.”

The production is a prequel to Peter Pan where the audience will get to learn about Pan’s past and how he became the lovable scamp we all know.

Peter and the Starcatcher is by Rick Elice adapted from the books by Ridley Pearson and Dave Barry.

The production will be filled with plenty of heartfelt, comedic and action-packed moments that will be perfect for ages eight and up.

HHS Theater Director Jefferson Casey said the department has been working hard on the production and encourages anyone to come out to see one of the shows.

Parking for the show will be available on the cafeteria side of HHS.

OHOH Run For Their Lives set for April 20

By GRAHAM BROOKS / Staff Writer HELENA – Registration is now open for a run that will quite literally save... read more