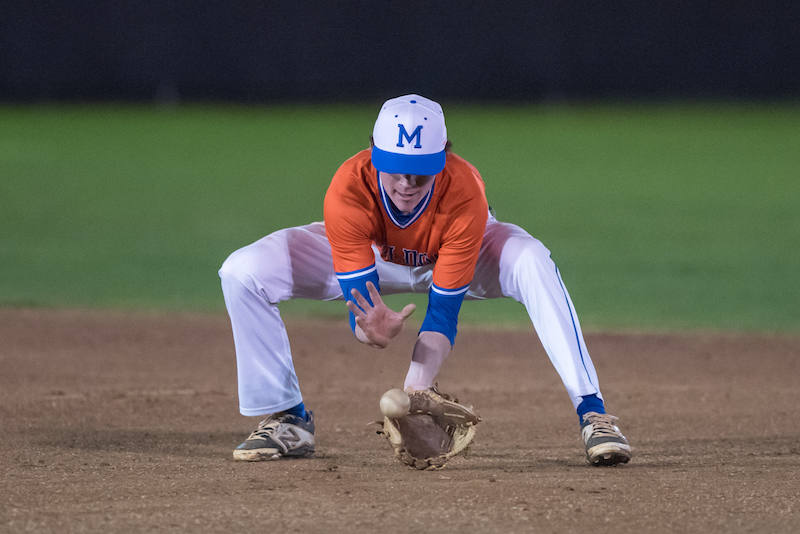 Montevallo’s baseball team won its fifth game in a row and its first area contest of the 2019 season with a victory over Indian Springs on Tuesday, March 5. (Reporter photo/Keith McCoy)

NORTH SHELBY – It’s been a momentous start to the 2019 baseball season for the Montevallo Bulldogs, and it got even better on Tuesday, March 5, with a road win at area opponent Indian Springs to pull off their fifth consecutive victory and improve to 7-1 overall this season.

It what was a pitchers dual for the majority of the night took a drastic turn in the top of the seventh when the Bulldogs scored seven of their nine runs to put the game away and close out a 9-0 shutout victory.

A big reason for that opportunity in the top of the seventh was due to consistent pitching from Josh Mims in the first six innings. He not only allowed just two hits on 105 pitches, but also struck out 13 batters faced to take a shutout into the seventh, before Cody Posey came in and closed the game out with two strikeouts in the bottom of the final inning.

While the game was slow for the most part before that final-inning explosion, Montevallo was able to jump on top in the top of the first, and it started with the two pitchers.

Mims laced a one-out single to center field to put a base runner on before stealing second. Then Posey was able to stripe a line drive to left field to drive Mims home for a 1-0 lead for the Bulldogs.

Montevallo was able to put two base runners on in each of the next three innings, but it wasn’t until the top of the fifth that the Bulldogs were able to capitalize with their second run of the game.

A one-out double from Clay Colley was followed by an RBI-single from Baxley Shores to put the Bulldogs on top 2-0.

Both teams threatened with base runners through the bottom of the sixth, but no other runs were added in that time span.

That changed quickly in the top half of the seventh, however, as Montevallo came to the plate ready to put the game away.

A lead-off walk to Colley was quickly followed by a double from Shores to drive in Colley and a walk from Robbie Gallagher to put runners on first and second.

Following the first out of the inning, the Bulldogs drove in three more runs without even recording a hit thanks to three walks in a row and an error to take a 6-0 advantage.

That was then followed by an RBI-single from Grant Cordes driving in two more runs, before Shores hit a sac fly two batters later to drive in the ninth and final run in the 9-0 victory.

Shores ended up leading the team with three RBIs after a 2-for-3 game at the plate. Cordes went 2-for-5 and drove in two runs, while Posey was 3-for-5 driving in two runs as well. Mims also had two hits and drove in a run with two runs scored.

Malik Inabinette, Colley and Gallagher also had a hit in the win.