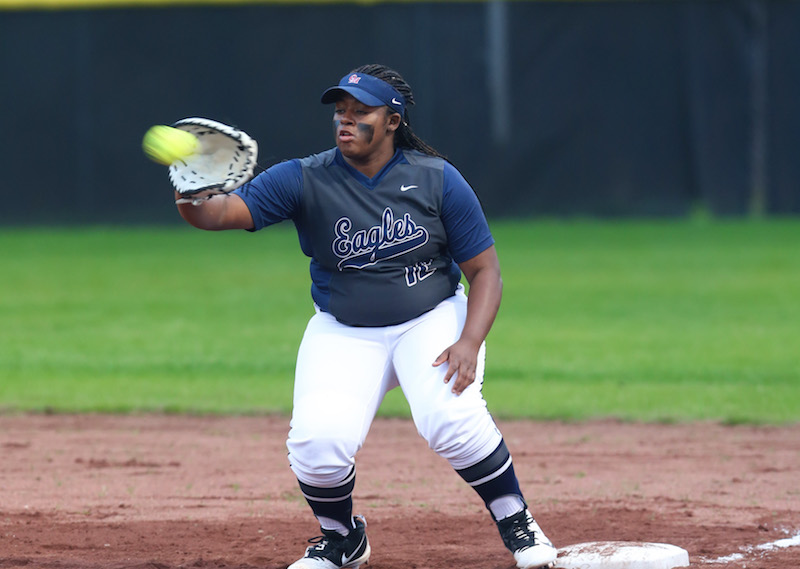 The Oak Mountain Eagles picked up their first win of the 2019 season by taking down Clay-Chalkville 16-7. (For the Reporter/Cari Dean)

PINSON – In a game featuring 23 runs, 20 hits and 11 errors, the Oak Mountain Eagles were able to take down Clay-Chalkville 16-7 on the road to pick up their first win of the 2019 softball season behind a consistent effort featuring three or more runs in four of the seven innings played.

Early in the game, the Cougars had an answer for the Eagles and put up four first-inning runs to take the early lead and scored a total of seven through the first three innings, but Oak Mountain didn’t give up another run in the final three innings to pair with an already dominant offense.

While Clay took the early lead, it didn’t mean the Eagles were slow out of the gate in the top half of the first.

After a ground out started the inning, Grace Hummel, Abi Brown and M’Kiyah Mitchell all singled, the latter of which drove in the Eagles first run of the game.

After a fielder’s choice got the lead runner out during the next at bat, Hannah Atwood stepped to the plate and tripled on the first pitch she saw to drive two more runs home for an early 3-0 lead.

The Cougars did take a 4-3 lead in the bottom of the first, but consistency became Oak Mountain’s friend and it showed in the top of the second.

The Eagles took the lead back quickly after three errors, a walk and a single led to two runs crossing the plate. That was then followed by a fielder’s choice from Brown and a sac fly from Mitchell to extend the lead to 7-4.

After Clay had no answer in the top half of the inning, Oak Mountain came back and took advantage of another error to score an eighth run on a Lacy Marty groundout that resulted in Atwood crossing the plate due to an error allowing her to get into scoring position.

Trailing 8-4, the Cougars added a run in the bottom of the third on an RBI-single to make it 8-5, but Oak Mountain had a bigger response in the top of the fourth.

A triple from Brown, singles from both Mitchell and Emily Hart and a double from Atwood drove in a combined two runs, before a sac fly added another run to put the Eagles on top 11-5.

In a game of back-and-forth, Clay came back with a lead-off double and a home run in the first two at bats of the bottom half to make it 11-7, but that became the Cougars’ final damage of the night.

Neither team threatened in the fifth or sixth innings, but in the top of the seventh, the Eagles closed the game out with emphasis thanks to five more runs highlighted by a three-run double from Mitchell to cap off the 16-7 win.

Mithcell’s unbelievable game featured a 3-for-5 night at the plate with six RBIs and three runs scored. Atwood also had a strong game going 2-for-4 with four RBIs. Brown picked up three hits, going 3-for-4 with one RBI and two run scored. Hummel and Julia Tucker each added two hits.

Atwood pitched all seven innings in the circle and allowed seven runs, seven walks and six hits, but also struck out seven to pick up the win.

A tough schedule early currently has the Eagles at 1-3 overall.