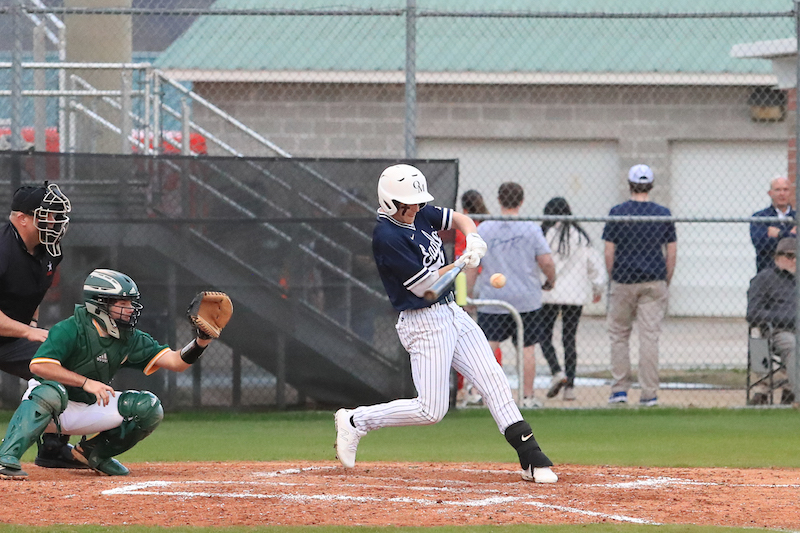 The Oak Mountain Eagles were able to hang on for a two-run win against county-foe Pelham on Tuesday, March 5, after the two teams combined for 30 hits. (For the Reporter/Dawn Harrison)

PELHAM – For the second time this season the Oak Mountain Eagles were able to take down the Pelham Panthers on Tuesday, March 5, on the road, but this time around it was much more difficult than the 5-0 victory a week earlier.

Pelham, however, tried to make a final run in the home half of the final inning by scoring three late runs, but eventually ran out of steam to drop a 10-8 game.

With it being a cold night, the pitching for both squads never really warmed up, but the bats were on fire early.

Oak Mountain (5-1) got a lead-off double from Jackson Kimbrell to kick-start the night. After a ground out, Landon Cato and Turner Hughes hit back-to-back singles, both driving in a run to put the Eagles on top 2-0 at the end of the top half of the inning.

Pelham (3-4) then stepped to the plate and swung away as well. The Panthers got singles from Cody Ferguson, Carter Reid and Kasey Clark to lead off the inning and drive in one run. After a strikeout, Kyle Camlic then singled on a line drive to left field to drive in the game-tying run before two consecutive outs were recorded.

The Eagles continued their consistent start in the top of the second thanks to Jack Wilson and Luke Percer reaching on a walk and single, respectively, to start off the inning. Following a strikeout, Caleb Ragland drove Wilson in with an RBI-single to right field, before Cato stepped to the plate and drove in Percer with a second consecutive RBI-single.

Having already scored four runs through two innings, and having forced Pelham to go 1-2-3 in the bottom of the second, Oak Mountain stepped back to the plate ready to add to the lead in the top of the third.

After a lead-off double from Jake Rivers, Hunter Hall singled to right field to quickly drive him in. That was followed by another single from Wilson, which allowed Percer to step back to the plate and drive in the Eagles’ sixth run of the game with a sacrifice fly.

Pelham was able to answer slightly in the bottom of the third thanks to back-to-back singles from Reid and Clark to kick off the inning, but only one crossed the plate when Camlic grounded into a fielder’s choice to allow Clark to cross the plate and make the score 6-3 at the end of three innings.

After a 1-2-3 inning defensively in the fourth, the Panthers stepped back to the plate and made more of a move this time around chipping away at the Eagles’ advantage.

Matthew Rye and Jackson Weaver were able to reach base through the first two at bats thanks to a single and walk, respectively. Following a strikeout, Ferguson singled to load the bases, before Reid singled on a line drive to center field to bring home pinch runner Jacob Shumate.

That was then followed by a sac fly from Clark to drive in Weaver. While a groundout ended the inning, Pelham had drawn to within a run at 6-5 through four innings.

But just as the Panthers seemed to be closing in, Oak Mountain pulled away again in the top of the fifth.

Dylan Fraser and Rivers led off with a double and single, respectively, before two outs were recorded. The Eagles, however, put together back-to-back singles from Percer and Kimbrell, both of which drove in a combined three runs to extend their lead back to 9-5.

Oak Mountain then added one more run in the top of the seventh with another RBI-single from Kimbrell to make the score 10-5 and put Pelham in a tough spot heading to the bottom of the seventh.

The Panthers, however, still had some fight left. They got a double and single in two of the first three at bats of the inning before a second out was recorded.

With two outs on the board, Weaver doubled on a line drive to left field to bring both base runners home and cut the deficit to 10-7. An error during Jason Wester’s at bat not only allowed him to reach base safely, but also allowed Weaver to score to make it 10-8.

That was the final run though. A fly out then ended the game stranding one on base and leading to Oak Mountain’s 10-8 victory.

Kimbrell led the Eagles at the plate with a 3-for-5 game, including two RBIs and one run scored. Ragland, Cato, Hughes, Rivers and Percer all picked up two hits for Oak Mountain.

Percer’s game included a 2-for-2 showing with three RBIs, three runs scored and a walk. Cato also added multiple RBIs with two, while Ragland, Hughes and Hall each added one.

Pelham was led by Reid with a 4-for-4 game at the plate including one RBI. Clark and Camlic both went 2-for-4 with two RBIs, while Ferguson was 2-for-5. Stowe, Matthew Meddick, Rye and Weaver all added one hit as well.