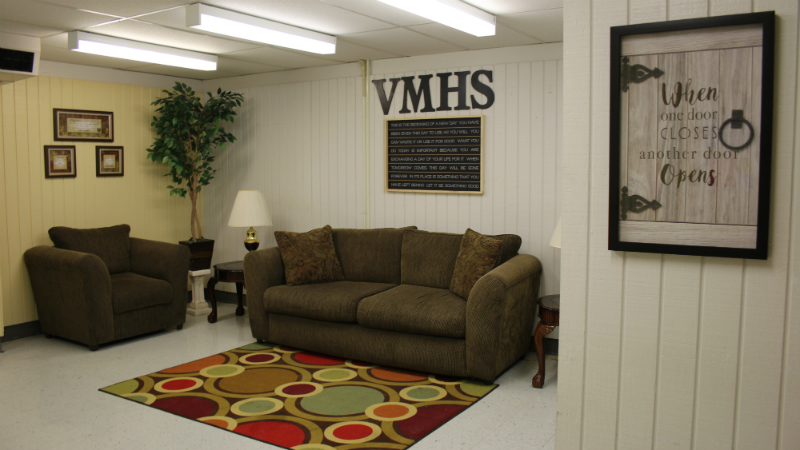 VINCENT – Sometimes students, even young ones, face problems that hinder their academic performance.

“When kids are burdened by things that are going on socially and emotionally, they can’t learn,” Edwards said. “We have seen a tremendous drop in discipline since we’ve been doing this.”

Though not all of the ideas from Pearl-Cohn would be applicable to local schools, especially one like VMHS that is much smaller, the room was something Edwards knew she wanted to implement.

Ground Zero is only part of the process that has been implemented at Vincent, Edwards said.

Step 1 of the process is “The Zone,” which includes faculty and staff members spending first period visiting classrooms to ensure everyone is starting their day positively.

Many times, it is apparent a student is overstressed when he or she first enters the school, Edwards said, so The Zone crew steps in to address the situation and seek a resolution before it can negatively impact the rest of the student’s day—and perhaps avoid it affecting other students as well.

Sixth grader Chandler Parker is among the students who have seen the benefit of The Zone, as special education teacher Amy Martin in particular helped her cope with a personal issue.

“If I have a bad day, she talks to me about it, and it helps me feel better,” Parker said.

The Ground Zero room provides a calm, neutral atmosphere away from a student’s peers. The space can facilitate meetings between two students, a student and teacher, a parent and a teacher and even a student and parent.

Edwards expects most use of the room to follow conflict, but it could also be used for grief counseling and other purposes.

Tae McGregor, a sophomore, is among the students who have used the Ground Zero room. After conflict arose between her and a teacher, they spent time in the room talking about the situation, including hurdles that were making it difficult for her to concentrate in class.

“It just helped me out with my situation, to be able to go there and talk about what I was going through,” McGregor said and added that since the meeting she better understands the teacher.

When not being used for counseling, the room can be used by students to take tests.

Edwards credits Assistant Principal DeWanda Nelson for decorating the room, which previously served as a classroom.

Future additions to the room could include diffusers, more relaxed lighting and flexible seating.

Vincent Middle High School has adopted a motto, “Be the One,” that it hopes to spread across the community, and students are leading the effort.

J.T. Youngblood, a junior, approached Edwards about mentoring younger children in Vincent. He enlisted the help of some friends, and the group—which calls itself “The Ones” based on the school motto—has visited Vincent Elementary School to establish relationships with the students there, including taking them gifts at Christmas and for other holidays.

“They wanted to make sure every kid in that school had a Valentine,” Edwards said.

J.T.’s younger cousin, K.T. Youngblood, learned about his cousin’s effort and wanted to start his own group of mentors.

“We’re trying to make an impact on the ones coming up that look up to us,” K.J. Youngblood said.