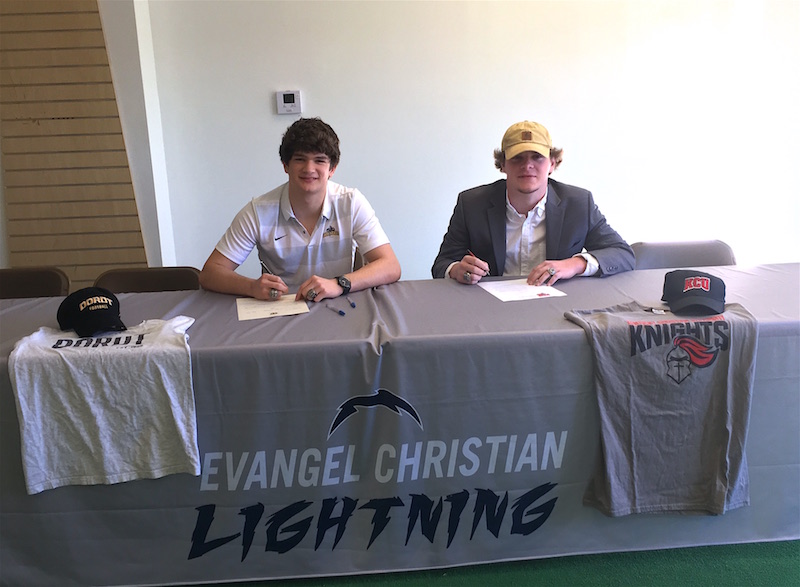 Evangel's Nate Arvizu, left, and Hunter Green sign their letters of intent to play football at the collegiate level. (Contributed)

MONTEVALLO – The Evangel Lightning football team has put together an impressive run over the last 10 years and that run has continued under second-year head coach Tim Smith, and on Wednesday, March 6, two of the Lightning’s best players got to sit next to one another and sign to continue their playing days at the next level.

Linebacker Hunter Green and defensive back Nate Arvizu, two of the team’s leaders and county’s best players this past season, each signed their letter of intent to play football at the collegiate level at the Evangel Sports Complex in front of friends and family.

This past season, Evangel finished the season 8-3 overall and won yet another state championship by taking down Ezekiel 58-34 in the title game.

Both Green and Arvizu played big roles in helping the team bring home that championship win thanks to season-long consistency.

Green entered his final season with the Lightning hoping to put up crazy numbers at the linebacker position, and he did just that.

It led to him becoming the undoubted best player among all AISA and ACSC teams this season thanks to posting 140 total tackles from his position, 100 of which were solo tackles. He also put up four tackles for loss and one sack.

Because of that production several schools came after him, but Kentucky Christian University ended up being the right fit and that’s where he has signed to play his college football.

“I would like to thank my coaches for always pushing me to be the best I could be,” Green said of his time with ECS. “Thanks to my family for all the sacrifices they have made to allow me to play the sport I love.”

Arvizu’s senior season was also a special one to watch unfold from the secondary.

Being the back line of defense for the Lightning, he not only locked down several of the best receivers, but didn’t let many ball carriers by him. Arvizu ended up totaling 98 tackles in the secondary and was also used in other facets of the defense, which allowed him to total seven tackles for loss and two sacks as well.

Arvizu has been committed to Dordt College, and on Wednesday, he made it official by signing his letter of intent to join the Defenders for the 2019 football season where he’ll add plenty of production in the secondary.

In their final two seasons at Evangel, Green and Arvizu led the Lightning to a combined record of 18-5 and two consecutive ACSC State Championship games, now the two friends and teammates will hope for similar success at their respective colleges moving forward.