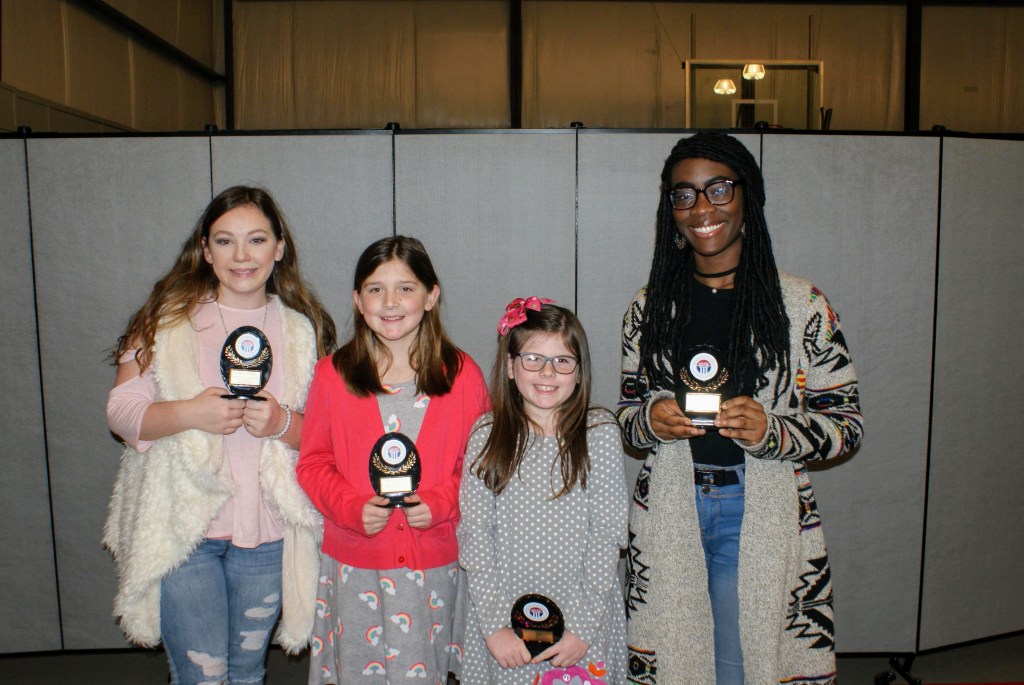 ALABASTER – Four Shelby County Schools students were recognized Wednesday, Feb. 20, during the Character in Action awards ceremony for demonstrating what it means to have good character.

Every year each Shelby County school district selects one student from each of its schools to receive a Character in Action Award. The ceremonies are held separately for each school district. These students have been handpicked by teachers for displaying respect, courage, responsibility, friendship and kindness toward others.

Shelby County District Court Judge Jim Kramer, who presides over Juvenile Court and is chairman of the Children’s Policy Council, said the Character in Action award ceremonies, held at Family Connection in Alabaster, are especially enjoyable for him because it isn’t often he gets to recognize students who are making good decisions.

As each student and their parents walked up to accept the award, comments from teachers and administrators were shared telling why each student was deserving of such an award.

Davis was praised for being someone who shows respect to adults as well as her peers.

“She is kind and an example of someone who knows how others want to be treated, in spite of her young age,” her nomination form read. “She is a true leader and her peers look up to her.”

Her teachers said she has tremendous self-discipline and has “remained on green or above” every single school day. She is described as someone who is a friend to all and goes out of her way to make new students feel welcome.

“She works hard daily to increase her test scores, reading level and math grade,” her nomination reads. “She has overcome challenges and displayed courage through it all.

Gremillion is a bright light in her classroom, according to her nomination form.

“She never has an unkind word to say and is always respectful and courteous,” the form reads. “She ensures that her peers are taken care of and is concerned about their feelings and tends to be the peacekeeper in her group of friends.”

She puts first things first when it comes to her academics. She puts 100 percent into her school work and when she sees others struggling in class, she often offers assistance. When her classmates are acting out, Gremillion does not submit to peer pressure. Instead, she continues to do what she knows is right.

Abernathy’s nomination form said she always shows respect to adults as well as her peers. Abernathy, who works as an office aide in the school’s front office, demonstrates responsibility every day at school. She often meets with adults in reference to confidential matters, she does a great job of communicating with parents who enter the office and there has been certain instances that she has ran the office for short periods of time with a substitute in place.

“Grace is always fair with students as they come to the office, and during instructional time, she is often seen as a peer mentor for other students in the classroom,” her nomination reads.

Abernathy’s family has endured several hardships this school year, but her teachers said she continues to show up at school with a can-do attitude and a smile on her face.

“Grace would have every excuse to give up and not want to be here at school every day,” her form reads. “Instead, she wakes up with the courage to continue on with her life.”

Osanu was described as a student who values fairness and who has always approached students and adults with dignity and an open ear.

“She has always done well in difficult and controversial class discussions,” her form reads. “She knows how to prove a point without rudeness or personal attack.”

“I can’t think of one person who has ever said anything negative about her or anyone who doesn’t like her,” a teacher noted. “She is very helpful as a teacher’s aide. She has helped me with several projects in my classroom. Recently, she was helpful by coming to me about a behavior she observed in my freshman class. Instead of calling out that student or causing a scene, she came to me about it and made a point to check up on the incident later.”

Osanu was praised for being a quiet leader. She is the kind of student who does not need to be told right from wrong, teachers said.

Following the awards ceremony, students had the opportunity to meet coalition representatives and pose for pictures with their families and school administrators.