COLUMBIANA – A Shelby County grand jury will decide during an upcoming session if it will uphold a human trafficking charge against a man who was allegedly involved in an “illegal escort service” in Alabaster. 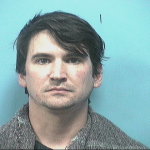 The Alabaster Police Department arrested Burleigh along with 54-year-old Jeffrey Todd Langley on Sept. 29, 2016, during an investigation into what police said was an illegal escort service involving at least one juvenile victim in and around the Alabaster area.

Burleigh was charged with one count of second-degree human trafficking and was released from jail the same day he was arrested after posting a $60,000 bond.

According to the indictments, Langley allegedly “arranged/provided individuals for (four victims) to engage in sex with for U.S. currency” between Jan. 1, 2008 and Sept. 23, 2016. Burleigh was allegedly involved in the illegal activity in June 2016, according to his arrest warrant.