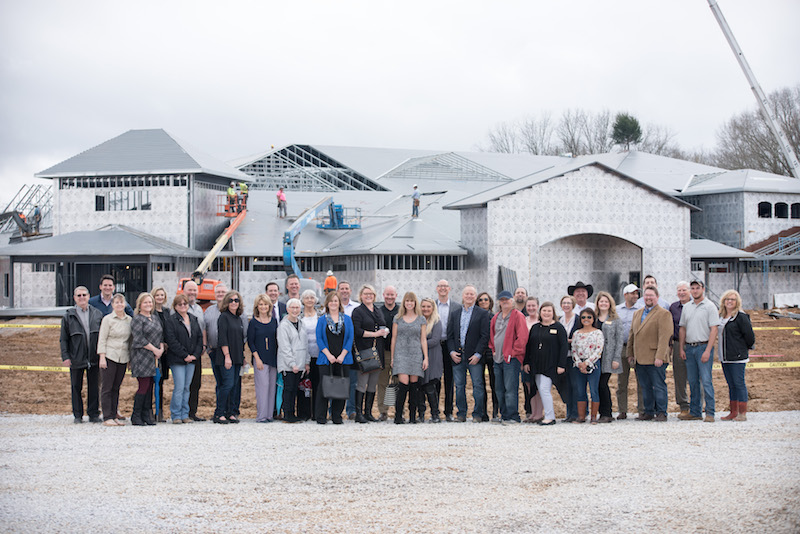 Nearly 40 people attended a topping-out ceremony at the site of the new Shelby County Arts Center in Columbiana on March 1. (Reporter Photo/Keith McCoy)

COLUMBIANA – Progress in the construction of the new Shelby County Arts Center at Old Mill Square was celebrated with a topping-out ceremony March 1.

Shelby County Arts Council Executive Director Bruce Andrews and Columbiana Mayor Stancil Handley addressed those gathered at the site as a crane lowered a cedar tree at the highest point of the building’s roof.

“In construction, when the peak is reached, they top it out with a cedar tree,” Handley said. “It’s a symbol (that) we have reached the top.”

Andrews praised local leaders and residents for their support of the project – a 30,000-square-foot municipal complex that will feature an art gallery, a performance theater, studios, a multi-use venue and a public park outside.

“I thank God that I live in a county and city that embraces imagination, creativity and inspiration,” Andrews said. “Twenty years ago, there was a field between Montevallo and Alabaster. Now, it’s called the American Village. I’m glad to say this will not be a field 20 years from now. Building a building is hard, but it’s worth it.”

“This is one more step in the vision becoming reality,” Handley said. “This is the culmination of years and years of dreams and visions of many people. I’m excited, and I hope you are, too.”