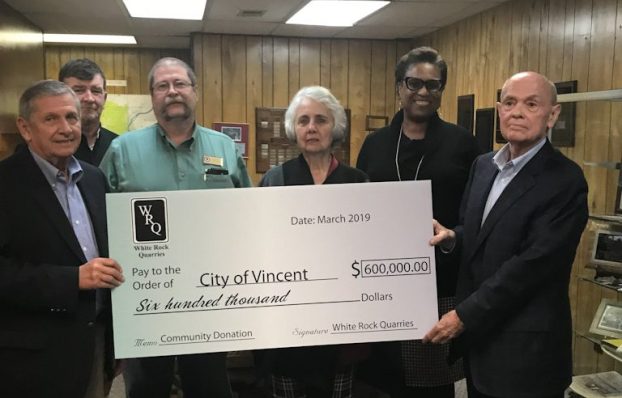 The Vincent Town Council accepted a check for $600,000 from White Rock Quarries. (Contributed)

VINCENT —  The Vincent City Council accepted a donation of $600,000 from White Rock Quarries CEO Jim Hurley on March 5 as the first half of an overall $1.65 million investment in the town.

“We’re here tonight to fulfill a commitment that was made in part of a work study put together in 2009,” said Hurley. “I’ve met with council members, principals, the mayor and the very interesting citizens to find out about what the big challenges are, and what we can do to facilitate in regard to funding certain projects.”

In front of a packed room of citizens and business owners Vincent Mayor Ray McAllister thanked Hurley and White Rock for the donation and discussed how important it would be for the citizens of the town, especially for the youth.

“These funds will put us in a position where we can do a whole lot for our citizens and young people. We’ve got a significant amount in this gift to go to the schools to modernize them and take care of our young people,” he said.

McAllister also detailed that the town plans to invest the money in seniors, recreation for the residents and much needed infrastructure improvements.

Alongside a donation in 2014 for a softball field, this amount constitutes half of the $1.65 million investment that White Rock has committed to town. Hurley explained that the last half would be given when “the quarry is up and running and the first sales are made.”

Operations Manager Nick Rudanovich explained that the quarry is now able to begin preliminary construction on the site. Their first move is to “build berms around what will become holding ponds and then actually build the ponds,” which will take about a year to complete.

Following the completion of the ponds the quarry will be engineering the design and construction of road improvements expected to take up to 18 months, according to Hurley.