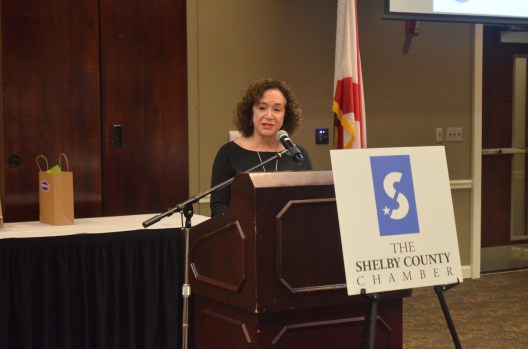 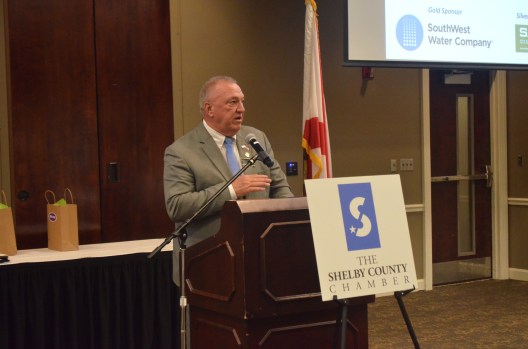 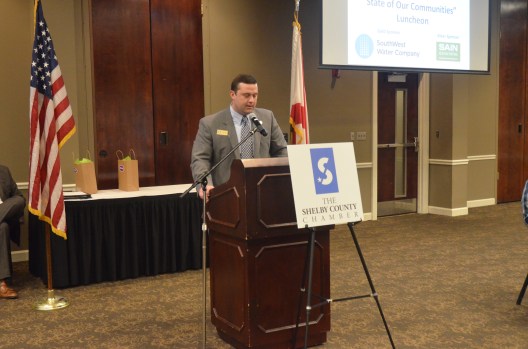 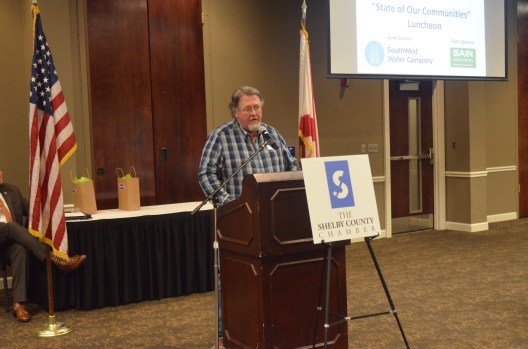 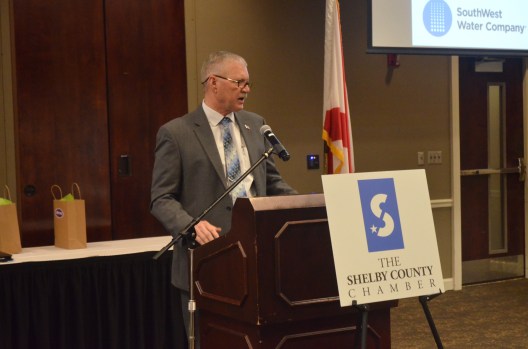 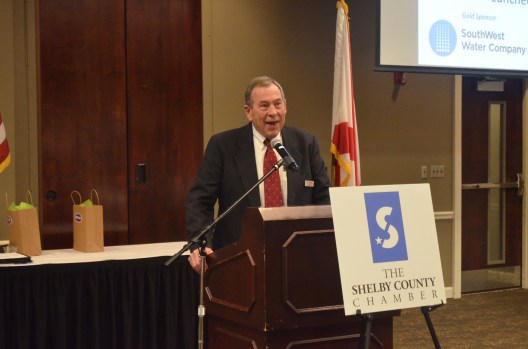 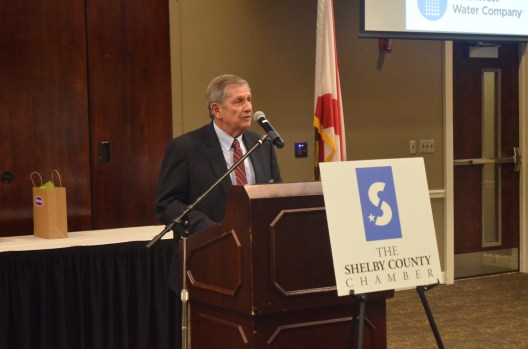 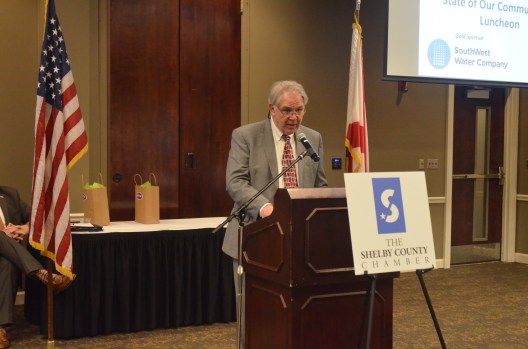 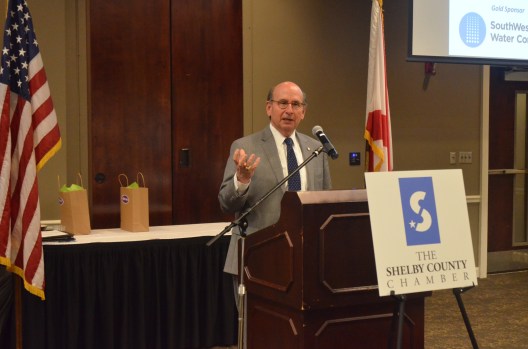 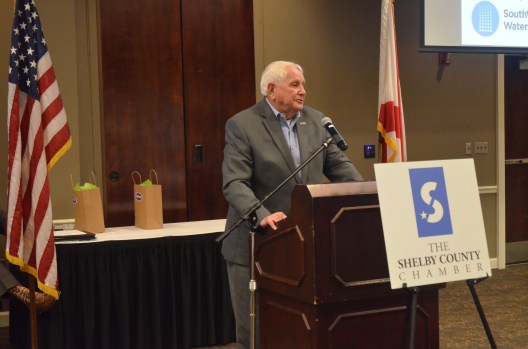 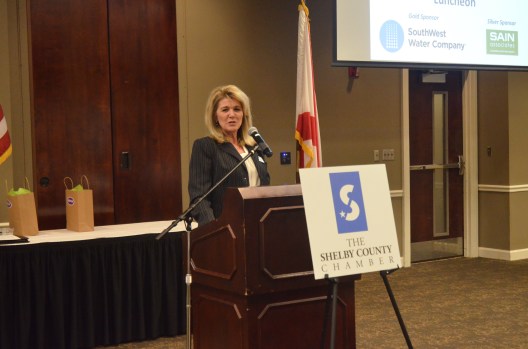 Marty Handlon was elected mayor of Alabaster in 2012. (FILE) 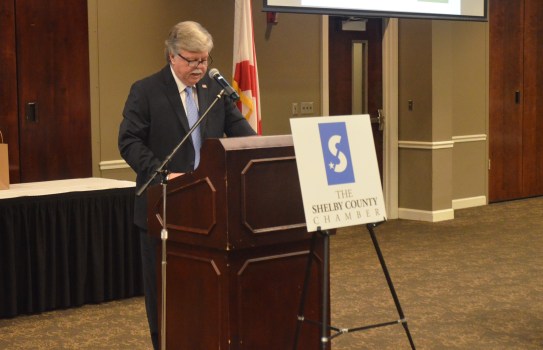 PELHAM – The Shelby County Chamber brought together mayors and city leaders from throughout the county on Wednesday, Feb. 27, for its annual State of Our Communities luncheon at the Pelham Civic Complex.

As each city leader spoke, they highlighted the good things happening in their city as well as some of the challenges they face. Names were drawn to determine speaking order. Here’s what each mayor had to say:

Mark Hall – Mayor of Helena
Hall said he is pleased with the progress being made in Helena. The city is contributing about $1 million to Shelby County Schools to go toward schools in Helena. The city is contributing $550,000 for tennis courts at Joe Tucker Park. The courts will be shared between the schools and general public. A new $250,000 soccer field is also in the works to accommodate the growing sport.

Hall said new home starts have increased and he expects those numbers to continue to climb, which is something he described as “a blessing and a curse.”

“We had a Waffle House open here recently, so now we’re on the map,” Hall joked. Hall said road and intersection improvements are next in line on the city’s to-do list.

Marty Handlon – Mayor of Alabaster
Handlon said the city is still working on its overlay districts, which has required a lot of time and money.

“But when you’re talking about how your city will look in the future – it’s really important,” Handlon said.

One of the city’s challenges is the fact that it can’t control private land transactions, Handlon said. She said it’s also difficult to control what businesses want to locate in the city.

“The only thing we can do is offer incentives to attract the right people here,” she said. “We have to focus on what we can control, which is quality of life and addressing social issues like mental health and the opioid abuse epidemic that’s happening nationwide.”

Don Greene – Mayor of Harpersville
“We’re proud of what we have in Harpersville,” Greene started. In the last year, he said revenue has picked up, which is a trend he hopes will continue. He highlighted the town’s community center that recently held its ribbon cutting and he said he expects the city’s golf course to open by mid-summer.

A challenge for the town is that it lacks the infrastructure that leads to development in residential areas. Driving through town, he said a lot of ‘for sale’ signs are posted.

The town is also looking for another doctor to open a practice there after recently losing its only physician. He said a suitable facility is already in place.

Frank Brocato – Mayor of Hoover
Brocato said he is striving to improve connectivity and walkability in neighborhoods. He said he’s also proud of the $80 million Hoover Met investment and a $2 million inclusive playground that is in the works. The playground, which is being funded with city, county and state funds and by private businesses, will be for all people regardless of ability.

He said the playground will also include a splash pad. In other news, the city has funded additional school resource officers for its schools and the Hoover Police Department is constructing a new training facility.

Brocato also spoke about shooting of Emantic Bradford Jr. by an HPD officer in late November 2018.

“We learned a lot about our city and took it as an opportunity to look inward, to grow and become better as a city,” he said. “We’re doing a lot of things now to do a better job of reaching into the community and to make everyone feel welcome when they come into this city for whatever reason.”

Lee McCarty – Mayor of Wilsonville
McCarty said Wilsonville has “everything you need” in addition to having the lowest municipal taxes in the county. He said the good things, such as expanding its ballpark seating and park, are easy to talk about. But the three areas that pose a challenge is the lack of Internet connectivity in the town, the coal ash pond that Alabama Power won’t relocate and a bridge that needs to be replaced.

Internet connectivity is a problem that impacts the entire county, McCarty said. But it’s an issue that the county and 58 Inc are working on. He said the Alabama Department of Transportation has agreed to replace a bridge that connects Wilsonville and Columbiana. Wilsonville will contribute $500,000 to the project and the county will reimburse $100,000 of that.

He added that Wilsonville has the “best spirited volunteers.” From its volunteer fire department to its beautification board, it is all done by volunteers.

Ray McAllister – Mayor of Vincent
Although the town has done a good job of spending wisely, McAllister said the town’s biggest problem is not having enough money. Despite that, he said the town has purchased three police cars and body cameras for its police officers. The turnout gear for its fire department was also recently replaced and the police and fire departments received new radio systems.

The town will soon begin constructing new sidewalks downtown, which McAllister said he hopes will attract new businesses to the area.

And until December 2018, the town was a “food desert,” meaning it didn’t have a grocery store. Prior to Food Outlet opening at the end of 2018, residents had to drive to the next city to buy groceries.

Larry Riggins – Mayor of Westover
Riggins said Westover is in the process of getting some paving done and working on its infrastructure with a sewer company.

He credits the city’s two boat dealerships with bringing more people to Westover. “We need to build on that,” he said.

He said improving walkability is something that needs to happen all over the county, in addition to Internet and fiber optic improvements.

Gary Waters – Mayor of Pelham
Waters said the city is working to complete its comprehensive planning process and he highlighted the city’s partnership with Hoover to combine its fleet maintenance operations. The partnership began March 1.

The city formed a HAZMAT response team that responds to emergencies all over the county. He also highlighted several projects in the works, such as the HEROES Experience that is set to locate just off exit 242 and a new development that will go across the street from the Pelham Civic Complex.

He said adjusting to having a city manager has been one of the city’s biggest challenges.

“City managers bring change and that tends to be the hardest thing to deal with,” he said.

Rusty Nix – Mayor pro tem of Montevallo
With American Village, the University of Montevallo and the national cemetery being located in the city, Nix said Montevallo is the “hidden jewel of Shelby County.” The city recently finished revitalization of Main Street, which Nix said has helped spur new business openings, such as boutiques, a coffee shop and restaurants.

The city recently purchased the old Victory Auto building and is working to finalize a tenant. Nix said he can’t say who the tenant is yet, but he expects it to be an economic driver for the city.

When it comes to making improvements in the city, $100,000 is being invested in the golf course and directory signs are planned for the downtown area to help people find their way around.

Casey Morris – Chelsea councilman
Morris noted that Chelsea, the fastest growing city in the state, has issued 277 building permits so far this year. The number of building permits issued in January surpassed the amount issued during the same time period last year.

He also noted that the city has reached a 10-year deal with Southwest Water for control of their sewer system, which will allow the city to reduce fees for residents.

The council recently approved $12.8 million in capital projects, which includes a new multipurpose athletic facility for Chelsea High School. Morris said the city is working with the county to build a facility that will service all sports at the high school. There is also an archery park and an all-inclusive playground planned. In the area of public safety, the city has purchased a new fire truck and is renovating one if its fire stations.

Stancil Handley – Mayor of Columbiana
Handley said he is proud of the city’s designation as a Main Street Alabama city, which has allowed storefronts on Main Street to be refurbished. The city recently completed a $2 million sewer rehabilitation project and just held a groundbreaking for a subdivision that will bring 150 new homes to the city.

Handley said it has been about 20 years since a new subdivision was constructed in Columbiana. “We desperately need new rooftops in Columbiana and we’re finally going to get them,” he said.

The construction of the new Shelby County Arts Council facility is well under way and is slated to open in July. Handley said he “fully intends for Columbiana to become the entertainment destination for central Alabama.”

She added that town leaders are working with Compact 2020 to address drug use in the community. She said businesses were asked to remove any type of mind altering products or anything used to fake a drug test from their shelves.

The city is also partnering with the Kiwanis Club to purchase Chromebooks for schools. The city is also funding an additional school resource officer and k9 at Oak Mountain High School. The said the town is focused on fighting drug use and ensuring safety in its schools.