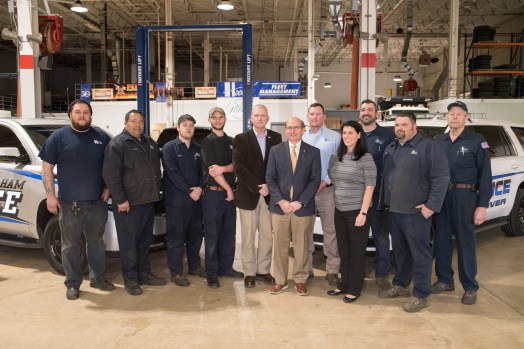 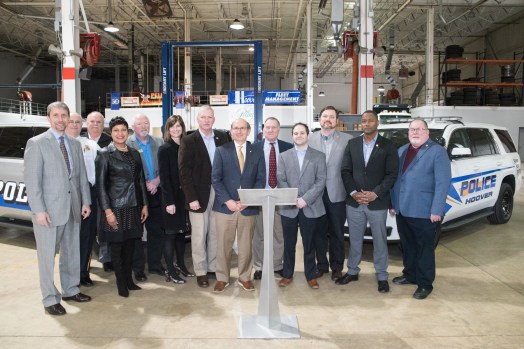 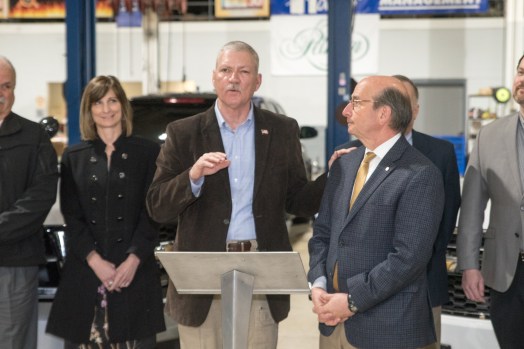 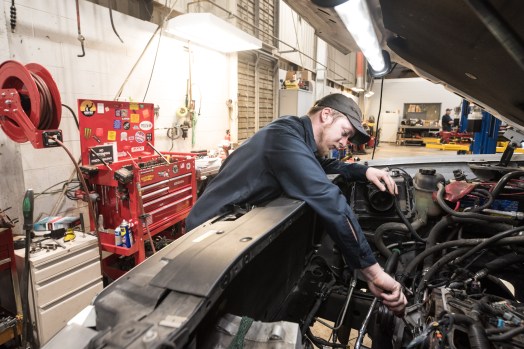 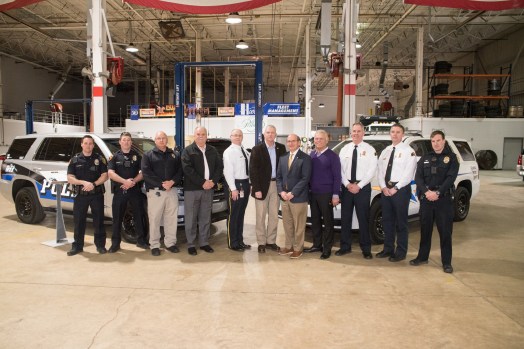 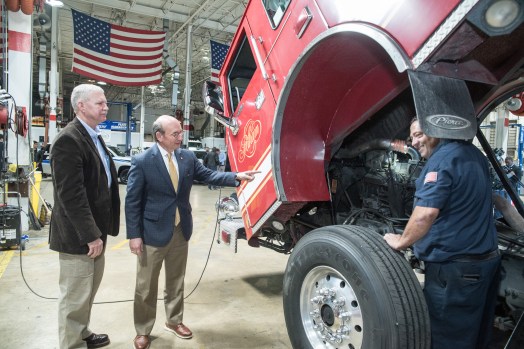 HOOVER – Hoover’s fleet maintenance garage at its Public Safety Center was on display Wednesday, March 6, as Pelham and Hoover city leaders and elected officials gathered for a press conference to officially announce a partnership between the neighboring cities.

Hoover Mayor Frank Brocato and Pelham Mayor Gary Waters said they hope their partnership will serve as an example for other municipalities to follow. The idea was the brain child of Waters who somewhat jokingly asked Hoover administrator Allan Rice at a social event if the city of Hoover would like to take on Pelham’s fleet maintenance.

Although it was his idea, Waters said it was the work of leaders within both cities that made the idea a reality. Brocato said the partnership makes sense since the two cities share borders and first responders often respond to emergencies that take place in the other’s city. Brocato said the relationship that will inevitably form between the first responders as they share a garage space is a good consequence that will benefit residents.

“We hear so much about regional cooperation and we’re showing that we can think outside of the box and share our resources,” Brocato said. “We’re very excited about what this means when it comes to efficiency. We look forward to delivering great customer service to our friends in Pelham.”

Brocato said he expects Hoover to save money on operational costs, but it’s Pelham that stands to benefit the most. There is a one-time service fee of $35,000 for Pelham that will be billed in installments of $7,000 over the five-year contract period. Pelham will also pay a 5-percent administrative fee that’s based on the total cost of services rendered under the contract on an annual basis. The administrative fee also allows the Hoover fleet manager to utilize fleet management software to track all work performed on vehicles owned by Pelham.

Pelham will reimburse Hoover for the annual cost of its Garage Keeper’s Liability Insurance and will be billed quarterly for any parts purchased for Pelham vehicles. It is estimated that Pelham will see a savings of about $200,000 per year as a result of the agreement. Pelham’s exact savings will be tracked.

Pelham’s four garage employees were laid off and Hoover had to hire two additional mechanics to help handle the extra work. The Pelham employees were encouraged to apply for the Hoover jobs. The city of Pelham will be responsible for paying for the salary, benefits, uniforms and any training needed for the two extra Hoover employees.

Waters said any Pelham employees left without a job will be first in line to be hired for a different position they qualify for.