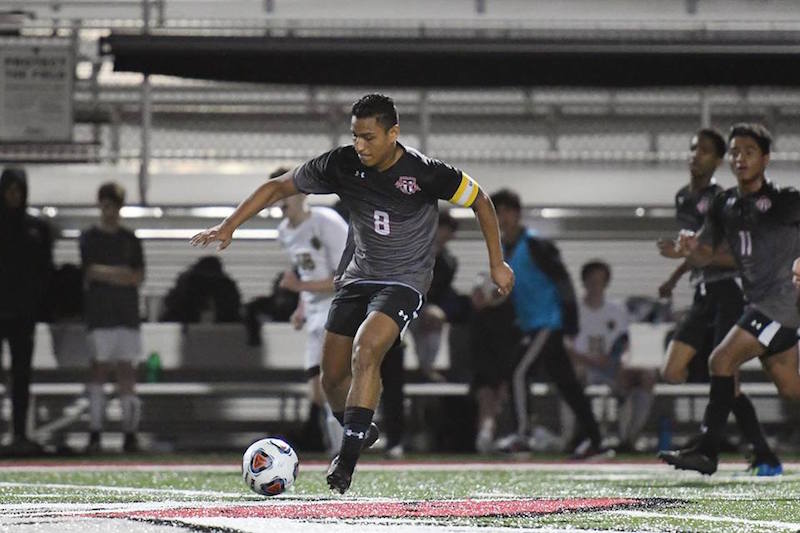 Thompson’s Jose Villnueva scored the team’s only goal against No. 2 Mountain Brook, but with a strong defensive effort that was enough to upset the Spartans with a 1-0 victory. (Contributed)

MOUNTAIN BROOK – It’s been an up and down start to the 2019 soccer season for the Thompson Warriors, who have yet to win back-to-back games, but they have also shown they are on the verge of a break through with two one-goal losses and two ties, and on Thursday, March 7, that break through may have come.

Sitting at 1-3-2 overall this season and 0-1 in area play heading into a road matchup against No. 2 Mountain Brook, Thompson went in and shocked the Spartans with a 1-0 road victory to pick up their second win of the season.

To that point, Mountain Brook was 5-1-1 overall this season, but now the Spartans have lost back-to-back one-goal games to county foes after losing to Spain Park 2-1 earlier in the week.

The lone goal of the game was put on the board when Jose Villanueva grabbed a rebound off a shot from Owen Yoder that hit the cross bar. Once the ball was in his possession, Villanueva buried the best scoring chance of the game into the back of the net for a 1-0 net.

While it was an impressive goal, what might have been more impressive was the defensive pressure and goalkeeping the Warriors were able to put together to pull off the win.

Going up against the second-ranked team in the classification, Thompson knew it needed a strong effort defensively and that’s exactly what they got.

The Warriors were able to feed off of that one goal defensively knowing that more offensive goals would be tough to come by against a stingy Spartans’ defense.

Thompson’s energy on that side of the ball paid off and became a key reason for not just the shutout, but more importantly the 1-0 victory.

Going into the game, Thompson had lost two consecutive games, a 1-0 contest against Oak Mountain and then a 3-1 loss to Benjamin Russell, but the Warriors looked to be on the cusp, and now hope that win will spark strong play throughout their area contests.

Another positive to build off of was the performance that MJ Dimbo did in goal by putting together a clean sheet and earning a shutout for the Warriors.

It was a welcome sign for Thompson’s defense, which had given up 10 goals through the first six games. If they continue to play that strong defensively, the rest of the season could be a special one.