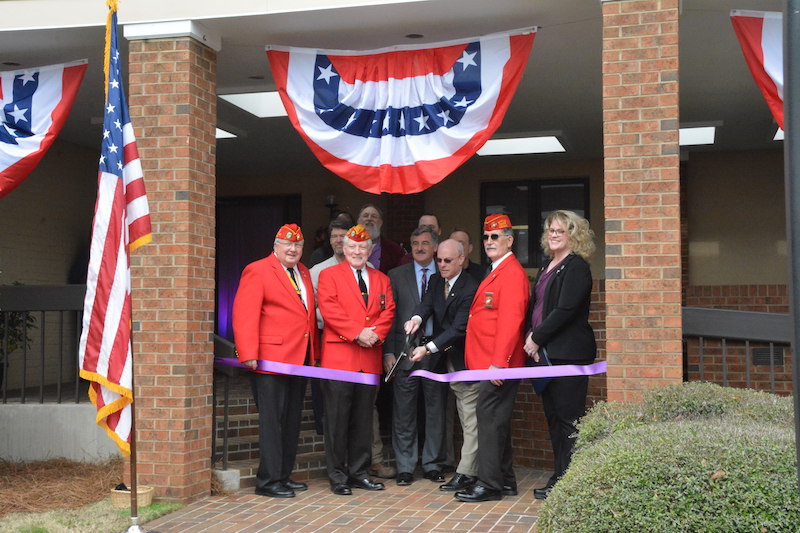 Dr. Jim Day cuts the ribbon at the University of Montevallo’s Office of Veteran and Military Affairs on Friday, March 8. (Reporter Photo/Emily Sparacino)

MONTEVALLO – The University of Montevallo hosted a ribbon cutting ceremony and reception March 8 at its new Office of Veteran and Military Affairs.

“We’re really pleased to have this,” UM President Dr. John W. Stewart III said to the crowd gathered in front of the Global Community Outreach building at 845 Valley St. “It’s a great opportunity to bring more veterans to the UM family.”

The office was created to serve UM veterans, those currently serving in the armed forces and their families.

The guest speaker was Dr. Jim Day, a UM history professor and one of Birmingham Business Journal’s 2018 Veterans of Influence.

Day read comments from state Sen. Cam Ward, state Rep. Matt Fridy and state Rep. April Weaver, who were unable to attend the ceremony because of a special legislative session in Montgomery, and then shared parts of a copy of the G.I. Bill of Rights from the 1940s, noting the benefits given to veterans through the G.I. Bill today are better than they were years ago.

Day said he and Stewart first discussed the idea of opening a veteran and military affairs office at UM about eight years ago.

“Thank you all for being here, and to the veterans in the crowd, thanks for your service,” Day said.

Traci Crenshaw, a U.S. Navy veteran, was introduced as the first director of UM’s Office of Veteran and Military Affairs.

“We are caring for our veterans and their families,” Crenshaw said. After her speech, she presented gifts to all veterans in attendance.

Crenshaw said she is also the only female director of a military affairs office in the state of Alabama—a revelation that, along with the ribbon cutting ceremony, coincided with International Women’s Day.

“I just think this is awesome,” UM graduate and U.S. Army veteran Connie Gaiter said. “Montevallo always thinks outside the box. I love this school—the diversity, the inclusion. To do this for the veterans, to do this for us … but to have Traci be the first female coordinator for this program, it’s really historic. I take pride in it.”

The office features a computer lab, free printing services, a lounge area, phone charging stations, a quiet area for studying and a conference room to assist veterans, service members and dependents, according to a press release.

It also provides, facilitates and coordinates programs to meet the needs of this student population.

UM was recently named a Military Friendly School, which honors institutions that provide quality opportunities for veterans and their families.