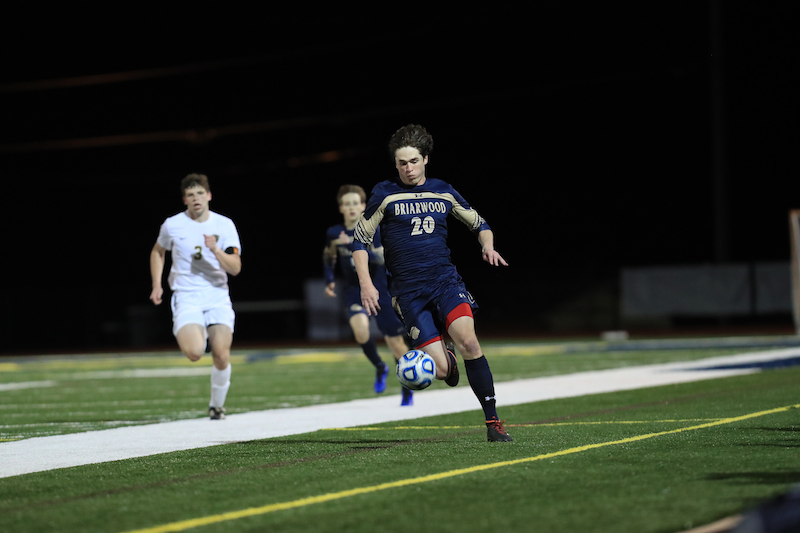 Briarwood's Logan Frost, above, scored his 100th career goal with the Lions to make the difference in a 1-0 victory against Indian Springs on Friday, March 8. (For the Reporter/Dawn Harrison)

NORTH SHELBY – As he marked his sight behind the ball of a penalty kick in the first half of an area matchup with Indian Springs on Friday, March 8, Logan Frost knew what the kick meant.

As any talented player would do, he shifted any sort of emotion to the back of his mind, and focused on a kick that would give his team a 1-0 lead in an area game. He took his stride, made contact and laced the ball into the back of the net for his 100th career goal with the Briarwood Lions.

The special moment ended in celebration with teammates, but as a humble senior, Frost knew the most important thing was that he had given his team a 1-0 lead in a game his defense was playing lights out.

“Much more than being a goal-scoring freak, which he is, I asked his buddies, in a word tell me about Logan, and this is what they said, ‘Brother, humble, hard-working, determined, leader, relentless’ Logan is all of those things and more,” head coach Shawn Brower said before the season when Logan signed with the University of South Carolina. “He’s a super talented, but very down to earth, humble guy. Don’t let that low-key attitude confuse you because he is a fierce competitor.”

And a fierce competitor he is. Frost is now one of 15 players that has scored 100 or more goals in the history of high school boys soccer in the AHSAA and just the second in Briarwood’s history to do so with Josh Brower ending his career with 124 goals.

Coming into the season, Frost had scored 23 goals in his first season and 25 in his sophomore year, before exploding for 40 goals last year to earn the Shelby County Player of the Year honor.

Now he’s well on his way to putting up more flashy numbers this season having already scored 12 goals through the first 10 games of the year. With a deep playoff run likely, it’s plausible to see Frost coming close to his former teammate’s mark of 124 goals as he continues to climb up the all-time scoring list.

More importantly, however, he’s playing a key role on a team that is facing a much more difficult area than it has in a while with state contenders such as John Carroll and Indian Springs being tossed into the Lions’ area after last year’s reclassification.

Both of those opponents are ranked inside the top 10, and through their first 10 games of the season, the 9-0-1 Lions have beaten both of those teams in back-to-back games by a combined score of 4-0.

While Frost has been impressive this year, equally as impressive has been the Briarwood defense.

After giving up two goals to 7A Fairhope in their second game of the season, the Lions have responded by not allowing a goal in their last eight games, and have now outscored opponents by a combined 38-2.

As the No. 1 team in the 4A-5A classification, and yet to lose a game, Briarwood is a clear favorite to bring home the state championship.

After losing in the title game each of the last two seasons, Frost isn’t concerned about his standing as far as goals go, the only history he is concerned about is bringing home a state championship.

With he and a strong contingent of scoring threats and a defense that might be the best in the state, that historic moment doesn’t seem like a far reach.