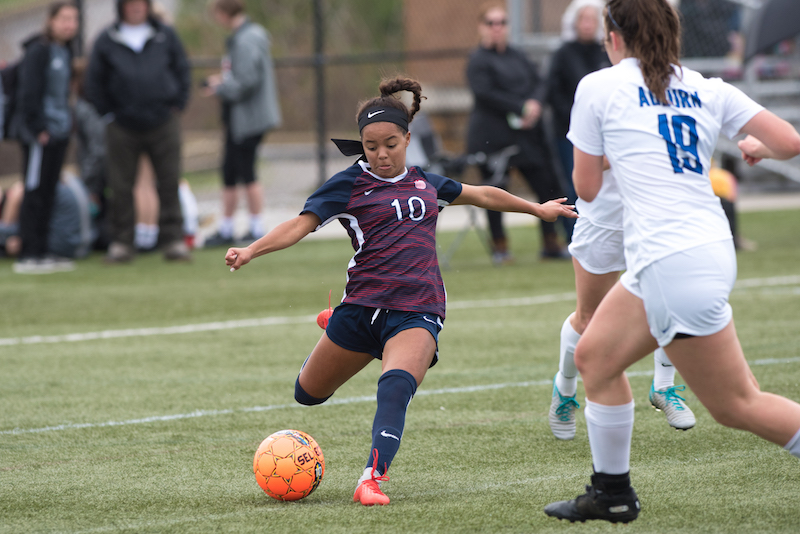 Oak Mountain’s soccer teams are both clicking close to midway through the season and sit in good shape in area play as they battle for playoff spots. (File)

With both the Oak Mountain boys and girls being ranked inside the top 10 of the Class 7A soccer standings and having a combined record of 16-2 this season, they have proven themselves as legitimate state championship contenders and that took another step in the right direction on Friday, March 8.

The girls took a trip down to Auburn and beat Auburn High School 2-0 to remain unbeaten this season at 10-0 (2-0) this season, while the boys hosted area opponent Hoover and handed the Bucs their first loss of the season to win their fourth game in a row and seventh in the last eight to pick up their third area win.

For the boys (6-2, 3-0), it was a strong start to the second half that propelled them to a 2-0 victory against previously unbeaten Hoover.

After a scoreless first half thanks to strong defense by both teams, the Eagles came out of the break determined to break that tie.

The scoreless tie remained throughout the first few minutes of the second half, but the sense was there that a breakthrough goal was coming soon thanks to more aggressiveness.

With 28 minutes left to play, that breakthrough came via Cody Wells, who found a slot and put the first goal of the game on the board behind an impressive shot into the back of the net for a 1-0 Oak Mountain lead.

Seeing that goal find the back of the net gave teammate Patrick Guffey some confidence and he quickly started looking for his shot not caring where he was on the field.

A minute after Wells’ goal, Hoover’s defense left too much space for Guffey, largely because he was 40 yards from the goal, but Guffey took the chance and fired the shot toward the goal. The Hoover goalkeeper had no chance, and Guffey made it 2-0 for the Eagles with 27 minutes to play.

Oak Mountain got a few more chances the rest of the game not letting up on the attack, but more impressive was the defensive line.

The Eagles were able to clear ball after ball during attacks from the Bucs to keep them from not only tying the game but event getting within a goal to pull off the 2-0 shutout.

For the girls, the game was a hard-fought defensive battle as well.

Taking on an Auburn team that had won three games in a row going into the matchup, Oak Mountain was able to play scrappy and physical enough to put two goals on the board and pick up a 2-0 shutout of their own.

Oak Mountain’s girls have now started the season 10-0 and have given up no more than one goal in those 10 games with seven of them being shutouts. The Eagles have outscored their opponents by a combined 53-3 so far this season.

With games against Chelsea, Hoover and Vestavia on March 12, 15 and 19, respectively, they know the road ahead is a tough one and remain focused.