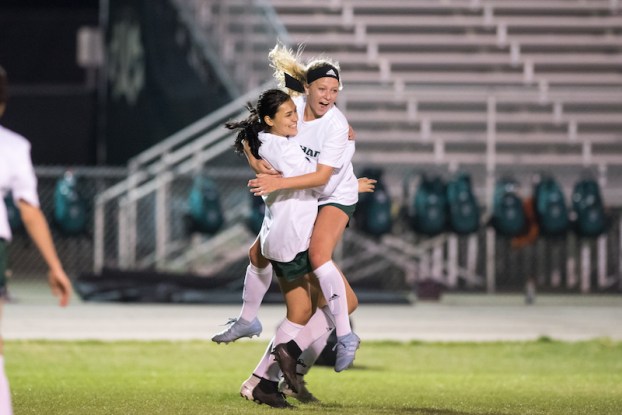 Pelham's girls soccer team was one of 13 teams to be ranked in the latest soccer standings released on Sunday, March 10. (Reporter photo/Keith McCoy)

It’s no secret Shelby County seems to be the central location for soccer talent in Alabama over the last 10-plus, and this year that continues to be no different with several teams poised to make a run at a state championship.

After 13 boys and girls teams were ranked between the four different classifications in the latest Eurosportscoreboard.com standings released on Sunday, March 10, the outlook is even brighter than we might have seen coming into the season.

Of those 13 teams, six are ranked in the overall top 15 of the boys or girls poll regardless of classification, while four No. 1 teams out of a possible eight are ranked No. 1 in their respective classification.

Starting with the No. 1 team in Class 7A, the Oak Mountain girls have been on a roll this season having started 10-0 overall with plenty of quality wins.

The Eagles, who are 2-0 in area play as well, have yet to allow more than one goal defensively and have put together seven shutouts so far. They are also ranked as the No. 1 overall girls team in the state regardless of classification.

Sticking in Class 7A, the Oak Mountain boys haven’t been too far behind the boys and recently moved up to No. 2 in the standings after beating Hoover.

Now sitting at 6-3 overall and 3-0 in area play, the Eagles are also considered the No. 2 team regardless of classification.

Spain Park’s boys and girls have also been playing well through the first month of the season, and each currently sits in the top 10 of their respective standings.

The girls are ranked No. 7 in the classification and the overall standings regardless of classification after winning seven of their last 10 games with two ties and a loss in that time span as well.

The boys (3-2-2) haven’t been as consistent in the win-loss column, but they have lost both games by two goals or less against other top-10 teams and their two ties were also to top-10 teams. They are ranked ninth in the 7A standings and 10th in the overall standings.

Thompson’s boys have also been up and down this season, but the Warriors have gone up against tough competition. They are recently coming off an upset of former No. 2 team Mountain Brook by a final score of 1-0 to claim the No. 15 spot in the poll.

Class 6A was highlighted by both teams from Chelsea and Pelham, but nobody is playing as well as the Chelsea girls, who are now the new No. 1 team in the classification after downing previous No. 1 Homewood.

The Hornets are also the eighth ranked team regardless of classification and currently sit at 8-0 overall and 1-0 in area play with wins against several elite schools.

Pelham’s boys were the next highest ranked team in 6A coming in at No. 5 thanks to three consecutive wins in dominant fashion. After a 3-2-1 start to the year, the Panthers have won three consecutive games by a combined 11-0 and are now 6-2-1 overall.

The Pelham girls and Chelsea boys were both just outside the top 10 coming in at No. 12 and No. 13, respectively.

The Panthers have yet to lose a game at 9-0 this season, but will face difficult tests in the coming weeks, including Chelsea in area play. The Chelsea boys have won four of five, but a tough 5-4 loss to Helena kept that from being five in a row.

So far this season, they have outscored teams by a combined 37-2 and have only given up goals in one game.

In the same classification, Indian Springs boys are also ranked at ninth despite a difficult schedule to this point. They have an overall record of 4-4-1 and are 1-2 in area play.

The final two teams ranked were both Westminster at Oak Mountain teams in the 1A-3A standings.

The boys are the defending state champions with a large chunk of players back, but a tough schedule currently has them at 1-3 overall and the No. 2 team in the classification on the boys side. All three of their losses are by one goal to ranked teams in higher classifications.

The girls, however, are the No. 1 ranked team at 2-1-1 overall this season, and also have several players back from last year’s team, which gives them a great shot at a deep run this season.

By ALEC ETHEREDGE | Sports Editor  Girls basketball in Shelby County was as impressive as it has possibly ever been... read more