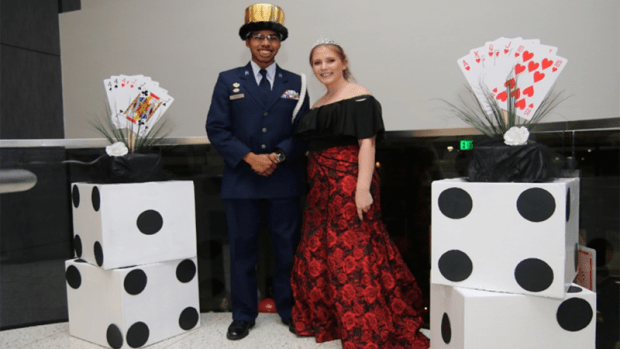 By Cadet 1st Lt. Jameson Bice / Special to the Reporter

In January, the cadets had a lock-in in which they earned community service hours by bringing in canned food items. The cadets also started planning for the Military Ball and an upcoming trip to the National Air Force Museum in Dayton, Ohio. The trip to the National Air Force Museum is planned to happen April 5-7 toward the end of the semester. Buses and hotel reservations have been reserved. The cadets are selling Fan cloth through the rest of February as a fundraiser to help pay for the trip.

Cadets who have qualified, purchased letterman jackets if they wished to do so. This is the first year that the AL-932 Air Warriors have had the opportunity of owning a letterman jacket. The jackets serve as an incentive to work hard in the program and keep good grades, as well as instilling a sense of pride in the wearers and being a source of retention and recruitment of cadets for the program.

The Air Warrior’s Military Ball was on Feb. 9, in the Thompson High School rotunda and lobby. The event started with a procession line where cadets introduced themselves and their dates to the instructors. After going through the line, cadets and guests sat themselves at tables and waited to start the rest of the event.

The Air Warriors would like to thank Joe’s Italian, Panera Bread, Sky Zone and many other local businesses for donating to the event. There was a total of $4678.95 in donations!

Before guests started to get their food, the singing team opened up with the national anthem, the color guard presented the colors, and the candidates for Mr. and Mrs. Aerospace were introduced. After everyone had time to eat, the candidates lined up and Erik Bazan was crowned Mr. Aerospace while Bailey Cosby was Crowned Mrs. Aerospace. Mr. and Mrs. Aerospace opened up the dance floor with the first dance of the night with music provided by the singing team. Throughout the rest of the night, door prizes were handed out and cadets had a great time.