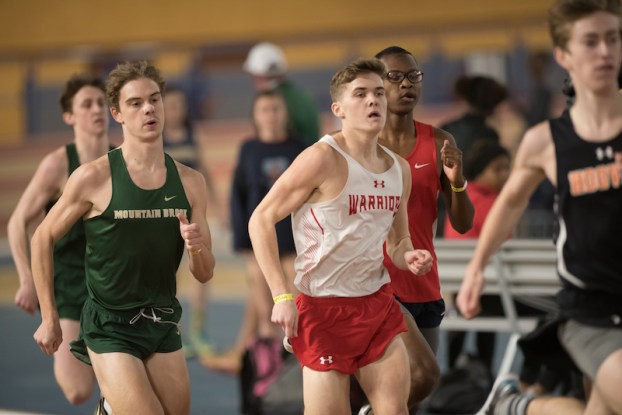 Thompson's Jace Jones was one of several runners from Shelby County to finish first in their respective event at the 2019 King of the Mountain track and field event. (Reporter photo/Keith McCoy)

Several track teams shine at King of the Mountain event

VESTAVIA HILLS – With the spring sports season in full swing, the outdoor track and field season is off and running, and on Saturday, March 9, six Shelby County teams traveled to Vestavia Hills High School to take part in the King of the Mountain Invitational.

With Thompson, Oak Mountain, Helena, Chelsea, Briarwood and Westminster at Oak Mountain all competing in the event, nine different athletes between boys and girls events were able to claim a first-place finish, while several others picked up top 10 finishes.

One of the strongest performances was put together by the Thompson Warriors, who put together top 10 finishes in several different events, including three event winners.

Jace Jones was one of those to finish first, as he and Brandon DeMarcus Lee fared well in the distance runs. While the two finished second and fifth, respectively, in the 800-meter run, they were able to claim the top two spots in the 1,600-meter run thanks to times of 4:29.52 and 4:35.06, respectively.

Several other boys fared well, including Dominque Hall, who was able to claim three top 10 finishes on the day. Hall finished fourth in the pole vault finals, fifth in the 300-meter hurdles and sixth in the 400-meter dash.

The girls were highlighted by two winners, including London Wooley and Niya Oden, both of whom finished inside the top 10 three times.

Wooley finished first in the 300-meter hurdles, while adding finishes of seventh and sixth in the 100-meter dash and 200-meter dash, respectively.

Oden won the long jump, while finishing third in the triple jump and eighth in the 100-meter dash.

Zoria Miller also added a third athlete to finish in the top 10 in three different events thanks to finishing 10th in the discus throw, eighth in the javelin and a high of second in the shot put.

Behind those three, Zakiria Holifield, Alayah King, Jill Douglas and Briana Rapley all finished inside the top 10 on two different occasions.

The final two top 10 finishers were Tyara Irvin and Autumn Alexander, who finished ninth in the long jump and 10th in the shot put, respectively.

Dimick won the discus finals, while also finishing second in the shot put, while Bell won the 1,600-meter run and finished seventh in the 800-meter run.

Glen Humphrey also had a strong day finishing fifth in the 100-meter dash and sixth in the 200-meter dash. Lexi Ray also had two top 10 finishes claiming 10th in both the 800-meter run and the 1,600-meter run.

Walker Cole, Antheny Carey and Jalen Thomas closed out the day for the Eagles with top 10 finishes as well. Cole finished fourth in the 3,200-meter run, Carey finished eighth in the high jump and Thomas finished 10th in the javelin.

Helena’s performance at the event was impressive as well thanks to first place finishes from Jonah Hyde and Allison Tanner.

Hyde was able to win the high jump, while Tanner won the high jump as well and finished inside the top 10 in two other events. She also claimed eighth in the long jump and second in the triple jump.

For the boys, Christian Hill and Garrett Hinds each finished in the top 10 twice. Hill finished eighth in the 110-meter hurdles and seventh in the 300-meter hurdles, while Hinds claimed ninth in the shot put and 10th in the discus.

Brady Barton and Damian Hines had strong events as well finishing fourth in the 1,600-meter run and seventh in the discus, respectively.

For the girls, Brooklynn Kirksey, Kirsen Gardner and Victoria Brown all had two top 10 finishes.

Gardner was able to finish third in both the discus and shot put, while Brown claimed eighth in the shot put and fourth in the discus.

Lexi Walton and Caroline Davis-Briggins finished things out for Helena by finishing sixth in the long jump and 10th in the 100-meter dash, respectively.

Chelsea was led by Teanna Cason with two top 10 finishes after claiming fifth in the 3,200-meter run and eighth in the 1,600-meter run.

For the boys, Desmond Battle and James Turnes finished seventh and 10th, respectively, in the shot put.

Briarwood’s Jay Kynerd was the only one to finish inside the top 10 twice for the Lions claiming seventh in the 100-meter dash and 10th in the 200-meter dash.

Jake Nunn and Chase Travis had strong showings for the boys as well, finishing third in the 400-meter dash and eighth in the javelin, respectively.

Westminster’s biggest highlight was Hannah York thanks to two top 10 finishes. She claimed ninth in the 100-mter hurdles and eighth in the 300-meter hurdles.

Maggie McCallum was the final girl to finish inside the top 10 for the Knights thanks to her finish of 10th in the javelin.

For the boys, Andrew Purcell finished 10th in the 800-meter run and Mitchell Drennen ninth in the long jump.

By NEAL WAGNER / Managing Editor ALABASTER – The Alabaster City Council is now accepting applications from those interested in... read more