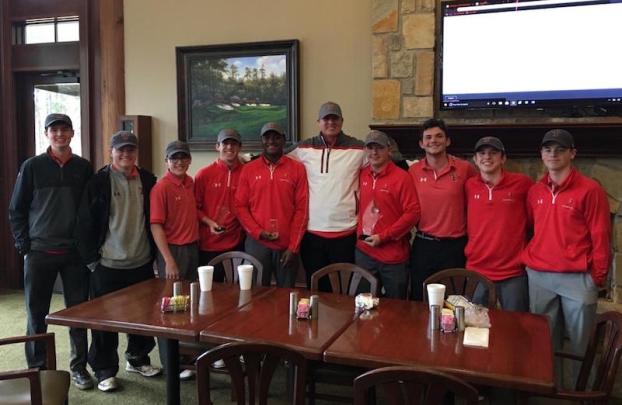 Thompson's golf team won the 2019 Calera Invitational with a team score of 310 to edge out Tuscaloosa County by one stroke. (Contributed)

CALERA – The Thompson boys golf team was able to best four other local teams and 11 of the state’s top teams on Monday, March 11, at Timberline Golf Club to bring home the 2019 Calera Invitational, marking the Warriors’ first tournament win of the season.

Thompson was able to finish ahead of other Class 7A schools Tuscaloosa County, Hoover and James Clemens to claim the title, while Helena finished fifth to close out the top five.

Oak Mountain, Calera and Chelsea all competed in the event as well and finished eighth through 10th, respectively.

While Thompson ended up winning the overall title, it went down to the wire. One stroke ended up making the difference, as the Warriors finished the tournament with a score of 310 compared to Tuscaloosa County’s score of 311.

A big reason for them edging out the Wildcats was due to the stellar play from Landon Wockenfuss.

Early in his round, Wockenfuss fell to 2 over through five holes and held steady at that mark for quite a while until making a move early on the back nine.

After a couple of birdies through his first five holes of the back nine, he was able to get back to even par, before adding one more birdie in his closing four holes to complete a round of 1-under par 70.

Teammate TJ Armstead also had a strong showing in the tournament thanks to a 1-over par round of 72 to play a huge role in the overall team score.

It not only led to the one-stroke victory, but also gave Thompson its lowest team total of the season. Now, the Warriors are hoping that will spark the team moving into the second half of the season and the playoffs.