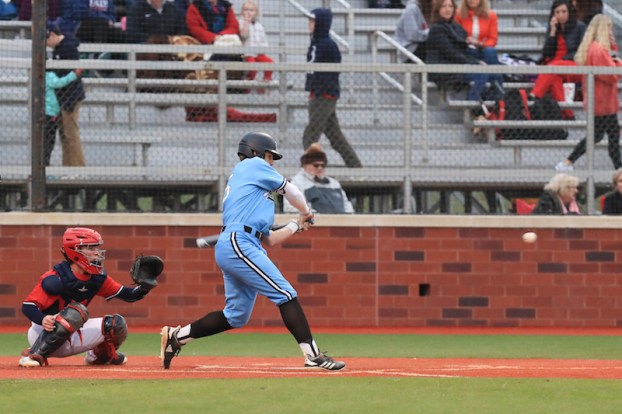 Spain Park’s baseball team picked up a 6-5 victory against Gadsden City on Tuesday, March 12, thanks to a late comeback. (For the Reporter/Dawn Harrison)

HOOVER – The Spain Park baseball team has shown plenty of promise early in the 2019 season, and on Tuesday, March 12, the Jaguars were able to take down Gadsden City to win their second consecutive one-run game by a final score of 6-5 to improve to 9-4 overall.

The Jags, who were coming into the game off a 2-1 victory against an extremely good Oak Mountain squad, had plenty of confidence and had proven they weren’t scared of clutch moments late in the game.

After taking a 3-1 lead through two innings, Gadsden City stormed in front with four unanswered runs between the third and fourth innings to take a 5-3 advantage.

Despite three scoreless innings in a row for the Jaguars during that span, they didn’t panic.

Still trailing 5-3 heading to the bottom half of the sixth, Spain Park finally made its final move and only needed one hit to overtake the lead and propel a two-out rally.

With one out in the inning, Jack Poist was able to stripe a double to center field on the first pitch he saw to start the rally. That was followed by a ground out, which put the Jags in a tough situation, but Poist still sat in scoring position.

Then back-to-back walks quickly gave Spain Park its best chance in a while with the bases loaded. Crazily enough, the Jags didn’t need another hit to bring home the three runs they needed to take the lead, as a third-straight walk brought in Poist and an error during the next at bat allowed both John Poist and Lane Willis to cross the plate for the 6-5 advantage.

While Gadsden City came back and put two runners on with two outs in the top of the seventh, Will May was able to get a ground out in the final at bat to close out the victory.

Early in the game, Spain Park fell behind 1-0 after the top half of the first inning, but then responded with three straight runs.

In the bottom half of the inning, the Jaguars again took advantage of mistakes as John Poist’s single was the only hit of the inning. Two walks, a hit batter and an error allowed the Jags to bring in both of their runs to take a 2-1 lead.

An inning later, Carter Sidor and Colton Ledbetter each singled, while two more walks allowed the Jags to take a 3-1 lead, before a fielder’s choice and double play ended the bases-loaded threat with no outs.

The Titans led off the top of the third with a solo home run to make it a one-run game, and then in the top of the fourth put together three runs to take a 5-3 lead.

Spain Park, however, saved its best for last and put together the late rally to pick up the win.

Ledbetter, John Poist, Sidor and Jack Poist each picked up a hit in the game, while six different batters had walks. RBIs came from John Poist, Adam Wygle and Matthew Robbins.

Eli Mefford, Jaxson Lucas, Austin Gothard and May each pitched during the game and combined to strike out seven while allowing six hits, five runs and seven walks.

By ALEC ETHEREDGE | Sports Editor MONTEVALLO – Both the Evangel Lighting baseball and softball teams have flown out of... read more