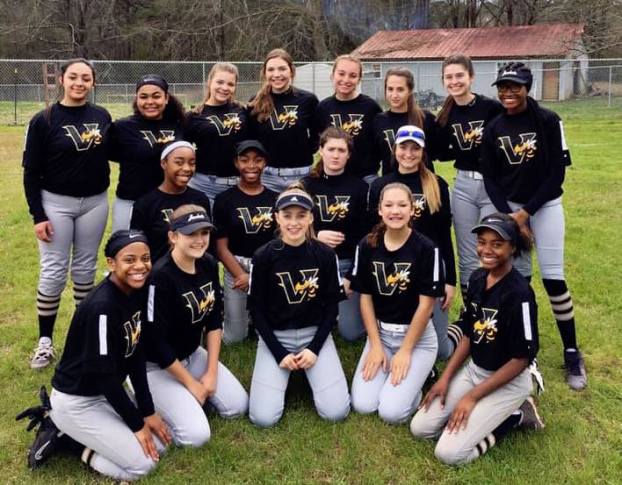 Vincent's softball team was able to improve to 6-1 on the season with a 7-0 shutout victory against Victory Christian on Tuesday, March 12. (Contributed)

VINCENT – Thanks to seven combined runs in the final four innings of a home contest with Victory Christian, the Vincent Yellow Jackets’ softball team improved to 6-1 overall this season.

The Yellow Jackets scored at least one run in each of the final four innings to open up what was a scoreless game in the first two innings to pull away for the 7-0 victory after another dominant effort both defensively and at the plate.

A big reason for the win wasn’t just the nine hits they hammered out at the plate, but the complete game from Maddy Walker in the circle. She didn’t allow Victory Christian to get any momentum throughout the game and finished things off in just 84 pitches thanks to allowing only three hits and striking out 12 of the 23 batters she faced.

After a quiet first two innings at the plate, Vincent finally found some offense in the bottom of the third thanks to a two-out rally. The inning started with a single from Chloey Carroll before two consecutive outs were recorded.

That, however, was followed by an RBI-double from Savannah Ingram to put the Yellow Jackets on the board first to take a 1-0 lead.

An inning later, Vincent tacked on one more run on an RBI-single from Gracie Williams to extend that lead to 2-0 as the Jackets continued slowly pulling away.

In the bottom of the fifth, however, it went from slow to fast. The Yellow Jackets led the inning off with a walk and back-to-back singles from Molly Reynolds and Ingram to drive in one run. That was followed by an error to allow a fourth run to score and an RBI-single from Kayla Maxwell to take a 5-0 lead through five innings.

Vincent then closed the scoring out in the bottom of the sixth thanks to RBI doubles from both Jakilah Norwood and Ingram to complete the 7-0 score.

Vincent was led by Ingram at the plate thanks to a 3-for-4 day featuring three RBIs. Behind her, Reynolds, Walker, Maxwell, Williams, Carroll and Norwood all picked up hits in the win.

By GRAHAM BROOKS / Staff Writer Parents and guardians looking to enroll a kindergartener who lives within the Shelby County... read more