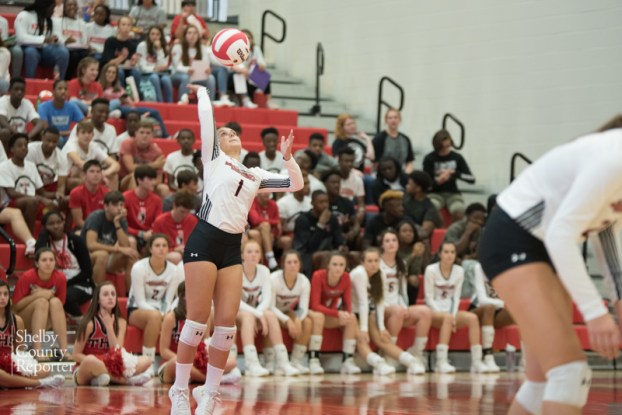 The Thompson volleyball program is hosting two opportunities for kids to get excited in the sport and the program over the next few weeks, including a training program and a free collegiate scrimmage and camp. (File)

ALABASTER – Coming off a trip to the Super Regionals during the 2018 season, Thompson volleyball is on the rise and has plenty of buzz around it.

Now, there’s an opportunity to get involved and learn from the coaches and players helping turn the program into a success with the inaugural Rock Solid Kidz Volleyball training program.

“Coach Glover actually started rock solid volleyball camps back in the day,” Green said. “We got away from doing, but got together after Christmas and put our heads together on how to get kids involved in volleyball from a young age, and this is what we came up with.”

Without their being many great opportunities for youth volleyball in the city, Green and Glover are hoping this will help build excitement around the program early on to help them grow up through program.

It’s meant to be a fun camp that creates that excitement, but will also help kids use their athleticism to train and build their skills with the goal of eventually playing at a high level.

“It will help get the athletic kids wanting to play to start from the ground up and get deep into the program to have a step up when they get older and to us,” Green said.

The camp is designed to teach boys and girls the fundamentals of volleyball through drills using scooters, ladders and large volleyballs. Those training methods will help increase foot speed and develop hand-eye coordination, while also engaging in social activities as part of a team.

“It’s not just learning volleyball skills, but also providing them the opportunity to teach them how to become better athletes overall,” Green said. “No matter what sport you are interested in, this training program, like the sport itself, will help build multiple skills needed. It’s something different from anywhere else in the community.”

Green also said she hopes to get competition out of each day, and for the fifth-sixth grade program, there will be a volleyball tournament at the end of the program to challenge the kids on everything they learned throughout.

“The biggest takeaway is that we get younger aged kids loving the sport of volleyball,” Green said. “They don’t get much opportunity to do that until they get later on in elementary school.

“We know how much this game can teach you about life and help you become an athlete, and we want to give them that chance. “

The camps will also be held in the new Warrior Arena to give the kids an exciting feel of what it’s like to be in a setting like that.

“Volleyball is that sport that you have to have a net and court to do which is tough to find in the community,” Green said. “We have access to great facilities and want to give them the opportunity to experience that.

“We want them to be young warriors. They get to come into our new arena and see all the bells and whistles, and we want that to make them to dream about playing here one day.”

The K-fourth grade program will cost $45 and includes a T-shirt and certificate. It will be held each Monday for four weeks starting on March 18 and skipping the Monday of spring break before resuming on April 1.

The fifth-sixth grade program will cost $60 and includes a T-shirt and certificate as well. It starts on Wednesday, March 20, and will continue on March 22, April 3 and April 11, before the tournament is held on April 13.

To sign up for the program, you can email Judy Green at Judy.green@acsboe.org or Tonnie Glover at Tonnie.glover@acsboe.org.

The day after the program comes to an end, Thompson will also host a scrimmage between Samford University and Mississippi College, which is the future home of current player Mikayla Touhey.

A free youth clinic will be offered from 2-3 p.m. that afternoon for anybody in eighth grade or younger, and will give athletes the chance to learn from college players and coaches.

That will be followed by a scrimmage open to the public from 3-5 p.m. inside Warrior Arena.

Thompson hangs on for 4-3 win against rival Pelham

By ALEC ETHEREDGE | Sports Editor PELHAM – A three-run third inning and a late run in the top of... read more