“War does not determine who is right – only who is left.” –Bertrand Russell

According to the Department of Defense data as of 2015, out of 320 million people, 1.3 million Americans are in active duty military, and another 1 million serve in reserves. The total number of Americans killed in all U.S. wars is more than 1.1 million.

Rachel Bunn Clinkscale is a member of Gold Star Wives of America, a nonprofit organization that provides support to the surviving spouse and children of a person of the U.S. military who died while a member of the armed forces, or who died subsequent to such service as a result of an injury or disability incurred during service. 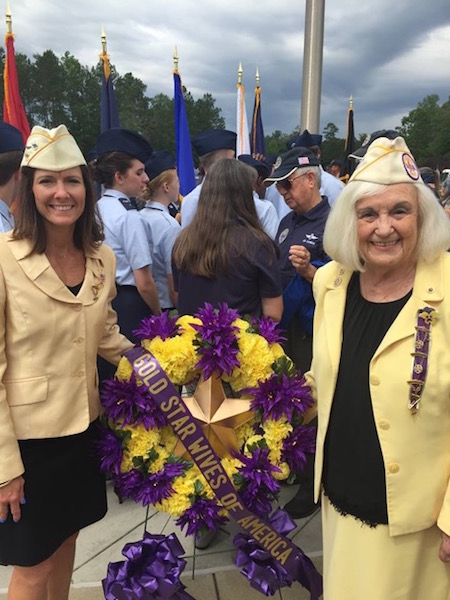 Rachel’s husband, Sgt. 1st Class James Albert (Jim) Bunn, was killed in 1968 during TET Offensive in South Vietnam. Jim was in Special Forces, one of the original Green Berets whose first tour in Vietnam was from 1964-1965 and volunteered for a second tour in 1967.

The Harpersville native became involved with GSWA the year following her husband’s passing. Bearing out its motto of “United we stand to win, divided we fall – and are forgotten,” Rachel has dedicated herself to remembering the sacrifice of our nation’s fallen by her work with an organization that is dedicated solely to the needs, concerns and welfare of veterans’ spouses. She has testified before Congress to secure legislation that ensures financial provision for surviving spouses.

Clinkscale serves as secretary for the Shelby County Historical Society, where she has volunteered for at least a decade. She is the Auxiliary President of the American Legion Post 911, and District Representative for GSWA, as well as treasurer of the Birmingham Chapter.

Although she is no longer involved, Rachel helped form the Blue Star Salute Foundation and the secretary to the Alabama Cemetery Preservation Alliance. She spearheaded the Wreath Across America event, which raised the funds for the placement of more than 700 wreaths to be placed in the cemetery of Currie-Johnson Funeral Home.

A mother of three, with nine grandchildren and four great-grandchildren, Rachel resides in Vincent in the 1846 log cabin her second husband Bill (Clinkscale), who passed in 2002 restored for her. The 82-year-old retired from a 25-year career with Travelers insurance. An RSVP member since 2012, Rachel has logged more than 21,000 hours. She is the recipient of the RSVP Gold and Lifetime Presidential Volunteer Service Award, 5-years-of-service pin and the RSVP Spirit Award. In 2015 Rachel was recognized in the Alabama Senior Citizen Hall of Fame.