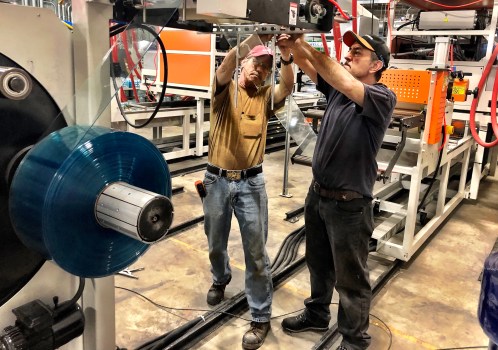 Jean-Claude Gerard, the production supervisor of the Extruflex manufacturing facility in France, provides training for one of the new Pelham employees, Jay Morrow (left), of Hoover. (Contributed) 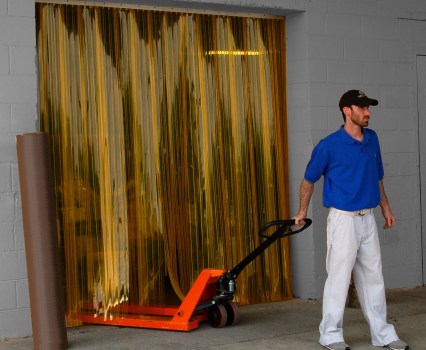 Extruflex manufactures clear flexible strips, like those seen in the photo, that hang in the doorway of a refrigerated area to keep the cold temperature zones separated from warm temperature areas. (Contributed)

PELHAM – Pelham business, Extruflex North America, has expanded its operations to include manufacturing.

Extruflex managing director Shane Solomon said the Pelham facility opened in January 2015 but was importing products from its manufacturing facilities in France and China and then distributing them in North America, Central America and the Caribbean.

Extruflex, a French multi-national corporation, manufactures flexible vinyl strips and sheets that are primarily used to make flexible doors and curtains. These are the clear flexible strips that hang in the doorway of a refrigerated area to keep the cold temperature zones separated from warm temperature areas.

“We first had to grow our customer base to support manufacturing,” he said. “Once we hit those targets, everyone was ready to make that investment.”

The company invested more than $1 million to purchase manufacturing machinery. Three employees from its facility in France and one person from China have been in Pelham for weeks conducting training sessions on how to use the equipment. The company’s production schedule began on Monday, March 11.

Solomon said about 10 people have been hired in the past few months to help with the manufacturing process. More hires will come as the company continues to grow and expand.

Solomon said Extruflex is the only company in this niche industry that manufactures internationally. The company is also the largest manufacturer of this product with sales and distribution offices in France, Germany, the U.K., China, Brazil, Russia and North America.

Abated sales and use taxes amount to $26,832, and abated ad valorem taxes on personal property over the five-year period amount to $12,297.

“The city of Pelham has been instrumental in helping us with this project,” Solomon said. “They have been very easy to work with to help make this a reality.”