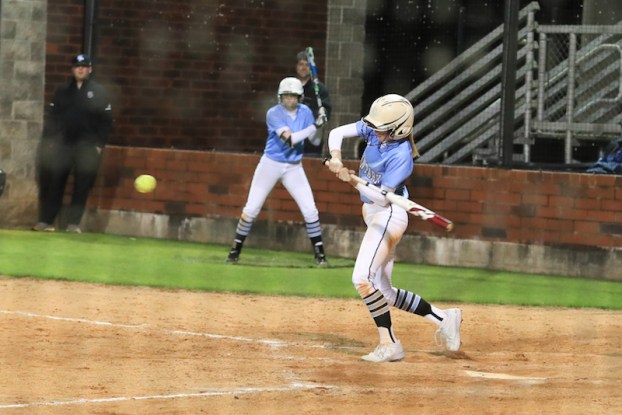 The Spain Park softball team got some big hits from Taylor Harrington on their 8-0 path to three-peating as Oxford Tournament Champions. (File)

OXFORD – The season continues to go from good to better for the Spain Park Jaguars’ softball team, and it reached a season best on Saturday, March 16, after closing out the Oxford Tournament with a 3-1 win over Central in the championship game at Choccolocco Park’s state-of-the-art facility.

With the victory, Spain Park not only three-peated as the tournament champions, but improved to 22-1 overall this season and picked up its 16th consecutive victory.

While the Jags have been on a torrid pace, blowing teams out this season, they got the chance to show clutch jeans throughout the tournament. Spain Park started with a 7-3 victory against Moody and an 8-1 victory against Sylvania.

Then the first tough test came against Northview in the third game. What was a scoreless game changed in the fifth and final inning when Annabelle Widra scored on an error by the catcher, followed by an RBI-single from Taylor Harrington to pick up a 2-0 victory.

That was followed up by an 11-1 win against Piedmont and then the first of two wins by one run in their next three games.

The first of those wins came in a 3-2 victory against Lawrence County. After falling behind 2-0 in the top of the first, Spain Park scored in the bottom of the first and second to tie the game at 2-2.

Then in the bottom of the fifth, the final inning, Harrington came through again with a walk-off single that drove in Widra for the 3-2 victory.

After downing Vestavia Hills 11-0 in the quarterfinals, the Jags earned a matchup with Hewitt-Trussville in the semifinals, a team they beat 18-2 earlier in the week. This time around, it was a much more challenging effort.

In a four-inning contest, Hewitt struck first with three runs in the top of the first leaving the Jags in a 3-0 hole. In the bottom of the second, Spain Park was able to answer with a two-RBI double from Widra to make it 3-2, but the Jags still trailed by one at the end of the inning.

In the bottom of the final inning, however, Harrington came through in the clutch again, something that just seemed normal at this point.

More impressive, the Jags were down to their final out in the inning with no baserunners, looking a semifinal loss in the eyes. Mackenzie Thompson started the two-out rally by getting hit by a pitch, which was then followed by a walk to Widra to put runners on first and second with no outs.

One batter later, still trailing 3-2, Harrington stepped to the plate and on the first pitch she saw laced a hit to left field that became trouble. It ended in a double for her that drove in both runs for the walk-off victory by a final score of 4-3.

The championship game was also a low-scoring affair and saw both Spain Park and Central scoreless through the first four innings of play.

Then in the top of the fifth, an exciting ending started. The Jags scored their first run of the game in the top half on an RBI-single form Maddie Majors to take a 1-0 lead.

Central, however, answered in a big spot with back-to-back singles, the latter of which was an RBI-single to tie the game and force a sixth inning.

In the top of the sixth, the Jags stepped up in the clutch again and with an aggressive attitude at the plate.

Lydia Coleman and Lindsay Parker hit back-to-back one-out singles, the second of which scored Coleman to give Spain Park a 2-1 advantage. After a second out was recorded, Caroline Kendrick then hit an RBI-single of her own, driving in pinch-runner Caroline Keith for a 3-1 lead.

Then in the bottom of the sixth, Widra stepped up in the circle to get Central to go down in order quickly and preserve a 3-1 victory and the championship.

Spain Park finished the tournament with a perfect 8-0 record.

No. 2 Bulls sweeps No. 1 Peoria with two shootout victories

By ALEC ETHEREDGE | Sports Editor BIRMINGHAM – The Birmingham Bulls and Peoria Rivermen have sat atop the SPHL standings... read more