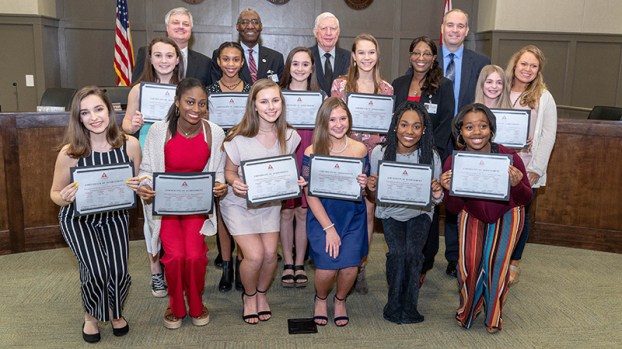 The Alabaster Board of Education honored the 2018-2019 Thompson Middle School Warriorettes dance team during a March 11 meeting. (Reporter Photo/Neal Wagner)

ALABASTER – The Alabaster Board of Education shined the spotlight on one of the most successful middle school dance teams in the nation during an early March meeting, shortly after the team wrapped up its 2018-2019 season.

School Board members honored the TMS Warriorettes dance team and their sponsor, Audra Faust, during the standing-room-only meeting at Alabaster City Hall on March 11.

The team’s accomplishments during the most recent season were numerous.

At the Universal Dance Association Regional Competition, the team placed first in the pom category.

The Warriorettes then moved on to the Dance Team Union National Competition, where they placed fifth in the hip hop category, third in the pom category and first in the kick category.

Members of the TMS Warriorettes honored at the School Board meeting were: