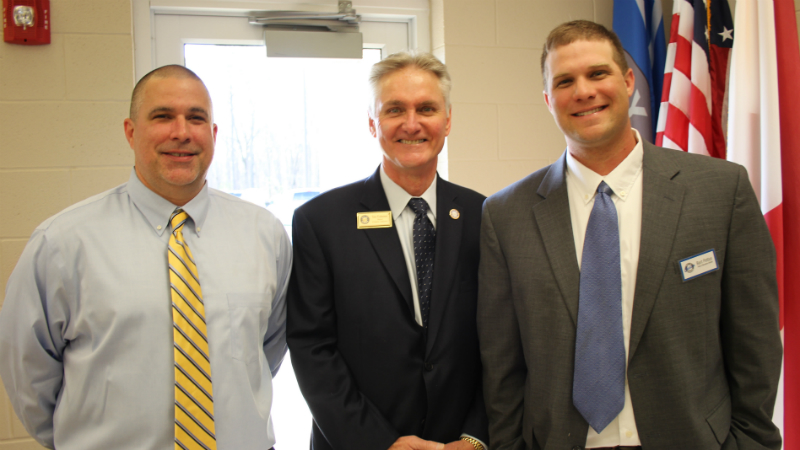 CHELSEA – Chelsea Mayor Tony Picklesimer on Tuesday, March 19, talked about many exciting things happening in Chelsea—including the introduction of the city’s first parks and recreation director.

Bart Pettus will lead the city’s parks and recreation department, Picklesimer said at the Coffee with the Mayor event hosted by The Shelby County Chamber at the Chelsea Community Center.

“I’m truly honored to be given this responsibility,” Pettus said and added that he has already received a “warm welcome” to Chelsea.

Some of people’s best memories can be made while participating in youth sports, Pettus said.

“There’s nothing more special when you are young than to wear your town’s name across your chest,” he said.

Pettus is originally from Demopolis, where his father served as the director of parks and recreation for nearly two decades. He earned a degree from and played baseball at Troy University.

After graduating from Troy, Pettus served the city for nearly 10 years with the parks and recreation department.

Pettus said he and his family are excited to be in Chelsea because of the community, its schools and more.

“It’s really obvious why people want to be here,” he said.

Earlier in his presentation, Picklesimer talked about the city’s growth to a crowd of about 125 people.

“Chelsea is all about family,” Picklesimer said. “Chelsea is about the way we work together as a community.”

In attendance were many residents, City Council members, business leaders and officials from neighboring municipalities and county government.

Chelsea was the fastest growing city in Alabama in 2017, issued 277 home building permits in 2018 and more recently issued more permits in January than in any other month over the last decade.

“Not only has our city grown, it has continued to grow,” Picklesimer said. “Chelsea is a hot market right now.”

One of the Chelsea’s most significant obstacles has been the sewer system serving the city, the mayor said, but a recent agreement will prevent rates from increasing through 2021 and includes a 75-percent reduction in fees charged to new businesses.

Residents can look forward to the fulfillment of a $12.8 million capital budget approved by the City Council for the current fiscal year, Picklesimer said.

The budget includes funding for improvements to the Community Center such as the addition of a wade pool, pickleball courts, a playground and amphitheater.

Other initiatives in the works include the re-routing of the intersection of Shelby County roads 39 and 47, and a multipurpose building at Chelsea High School.

“We’re committed to finding ways to partner with the Shelby County Board of Education to make our schools better,” Picklesimer said.