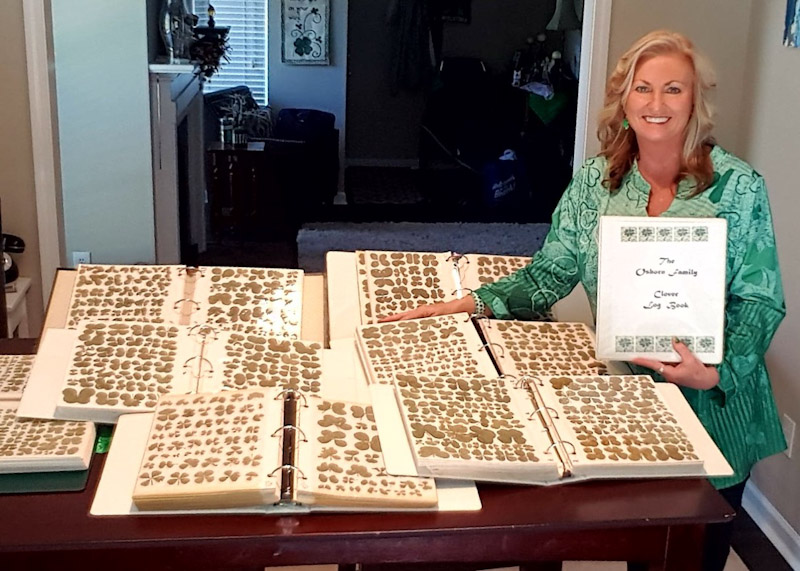 CHELSEA – Throughout the world, four-leaf clovers have tantalized people due to their association with luck and their reputation for being rare.

Chelsea resident Frankie Osborn has been building a collection of clovers over more than two decades reaching nearly 50,000 clovers with anywhere from four to nine leaves.

Osborn explained that her records go back to 1992 and the collection primarily started as a way to spend time with her children on nice spring days.

“I would challenge them to see how many four-leaf clovers they could find,” she said. “It resulted in some great family time together and enjoying mother nature’s bounty as well.”

As time passed, her children became more involved in school and outside activities, but Frankie still had a passion for finding clovers and continued her collecting on her own. She even based the name of her business, Lucky Realty, on the hobby.

Osborn describes her process as a “quick scan,” meaning that she can quickly look at any patch and tell if there are any four or more leaf clovers present. She also explained that the best time to find clovers is during the spring.

“Clovers are very sensitive to the elements, so the only time you can see them spread out is during warm cloudy days,” she said. “Also, this is usually before folks pull out the lawnmowers and chop off their heads.”

She states that she currently has 42,105 only including four-leaf clovers, but what is more impressive is the collection of rare greater numbered clovers. She said has a collection of anywhere from five to nine-leaf clovers. Her current overall collection contains 47,093 samples.

At one point she said the Guinness Book of World Records sent her paperwork recognizing her in the six and seven leaf category, but they never publicly noted it due to the changing nature of the records.

To this day, Osborn said she is still exploring her love for collecting clovers. She even uses her collection to visit schools, churches and other venues to teach about the story of St. Patrick.