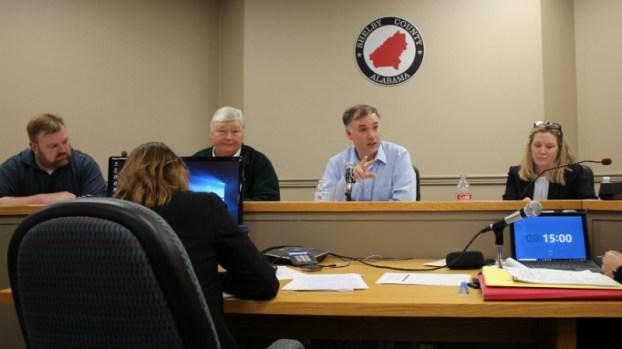 The Shelby County Planning Review Board deliberates during a hearing on Tuesday, March 12. (REPORTER PHOTO/STEPHEN DAWKINS)

Many of the people who would be neighbors of the planned Rushing Farms residential development in North Shelby County are opposed to the idea.

Though it has taken some time and effort, these residents have been able to voice their concerns, and the ensuing hearings about the proposed rezoning of the 63 acres of property have been an example of effective county government.

The property owner and would-be developer, Harris Doyle Homes, requested rezoning the property from E-1, which requires lot sizes of at least 1 acre, to E-2 Special District, which would allow for a mix of lot sizes above and below 1 acre.

The plan calls for 63 lots on 63 acres, and Brooks Harris of Harris Doyle Homes said the rezoning was requested so that the plan could devote more space to green areas, buffers and detention ponds to control stormwater runoff.

But residents have argued there is no justification for granting Special District designation, the planned smaller lots would not be compatible with surrounding properties, heavy traffic in the area would be worsened and an initial decision by the Shelby County Planning Commission was made based on inaccurate information.

“This rezoning benefits only one landowner,” said Mary Bahri, one of the three residents who requested a hearing by the Review Board.

The Planning Commission approved the rezoning request on Feb. 4, but the Shelby County Planning Review Board on March 12 voted unanimously for the Commission to reconsider its decision.

Review Board members echoed some of the residents’ concerns

“When you start adding lots, the community really ought to get something great out of it,” said Shelby County Engineer Randy Cole, who is a member of the Review Board.

The developer will now decide whether to submit the same rezoning request to the Planning Commission or a redesigned plan. Whichever plan is to be considered by the Commission will be advertised in advance of the hearing, which has not yet been set.

No matter what the Planning Commission ultimately decides, residents will know that there was an effective system for them to express their concerns, and those concerns were heard.

By ALEC ETHEREDGE | Sports Editor We’re always told “Patience is a virtue,” but when that saying originated in the... read more