Latest soccer rankings have 5 of possible 8 No. 1 teams from Shelby County 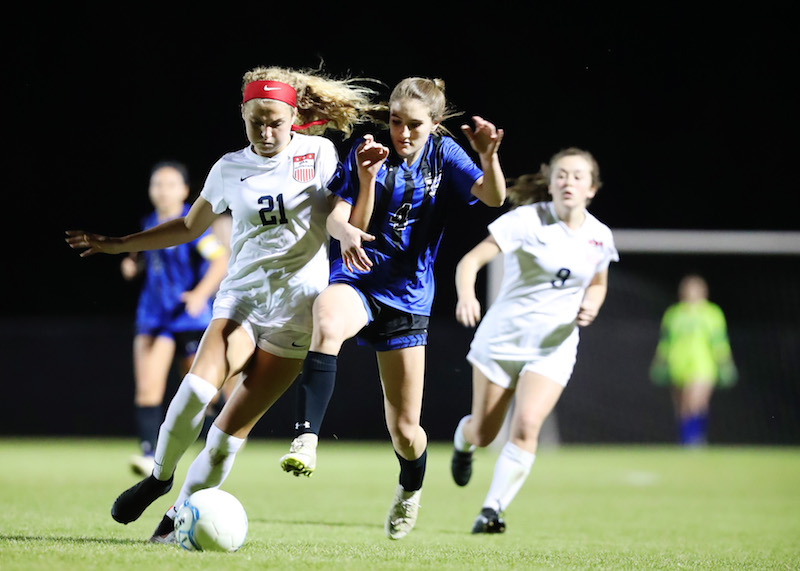 Oak Mountain and Chelsea were two of the five No. 1 ranked teams from Shelby County, while a total of 13 teams found a spot in the latest standings. (For the Reporter/Cari Dean)

With the midway point of the season here as teams prepare for spring break, several teams across Shelby County have made a name for themselves heading into the final stretch of the 2019 soccer season.

With five of a possible eight No. 1 teams residing in Shelby County in the latest Eurosportscoreboard.com rankings, it’s become clear that there are several real contenders for stat championships this year in the four different classifications for both the boys and girls.

Highlighting that group of number one teams is none other than both the Oak Mountain boys and girls, as each of the Eagles’ teams found the top spot in both the Class 7A boys and girls standings, but also the overall rankings regardless of classification.

Oak Mountain’s girls continue to shine this season, and remained the No. 1 team after improving to 12-0 overall this season. Since the last rankings were released, the Eagles have wins over 6A No. 1 Chelsea and 7A No. 7 Hoover.

The boys haven’t been too far behind this season, and have seemingly gotten better as the season has progressed. Through 11 games, they are 8-3 and have currently won six of their last seven games. The last two of those wins came against Pelham and Spain Park by a combined score of 2-0.

Also in the 7A classification, Spain Park’s boys and girls were both able to claim a spot in the top 11.

The girls have been one of the hottest teams as of late thanks to four consecutive wins featuring a combined 19 goals, while giving up just five goals in that span to earn the No. 4 ranking. The Jags have taken down Mountain Brook, Briarwood and Hewitt-Trussville in their last three victories.

For the boys, however, it’s been a different story after four consecutive losses dating back to March 8, which has made the Jags slip down to 11th in the standings. All four contests have come against top 10 teams, and Spain Park has lost three of those four games by one goal and the other to Hoover by two goals.

Thompson’s boys were the only other Class 7A team to earn a spot in the rankings and did so narrowly as the 15th ranked team. Sitting at 3-4-3 overall this season, the Warriors are improving and have won two of their last four games with a tie and a one-goal loss in that time span as well.

Like every classification, the county was strongly represented in Class 6A as well thanks to Chelsea and Pelham both having their boys and girls ranked.

Chelsea’s girls are coming off of their first loss of the season, but coming at the hands of the No. 1 ranked Eagles a classification higher by a final of 5-3, there was no shame in it.

The Hornets then bounced back with a 10-0 victory over Chilton County on Monday, March 18, to show there would be no carry over. Now 9-1-0 overall and 1-0 in area play, the Hornets are still No. 1 in Class 6A and No. 5 in the overall standings regardless of classification.

Like Thompson’s boys, the Chelsea boys’ team just slid into the standings at No. 14 despite losing three of four games. All three of those losses were to ranked teams, while two of them were by one goal.

Pelham’s boys and girls were also ranked, and both found a spot inside the top 11.

While the Pelham girls haven’t played as difficult of a schedule, they have still faced some difficult tests and so far, the Panthers are passing with flying colors.

They have yet to lose a game, and currently sit at 10-0 overall this season as the No. 11 ranked team in the 6A girls’ standings.

In the 4A-5a boys’ standings, both Briarwood and Indian Springs were in the top 10, but it still starts with the Lions at No. 1.

While Briarwood is coming off its first loss of the season to Albertville on Friday, March 15, and a 0-0 tie the game before against 7A Thompson, the Lions set a new state record for consecutive shutouts with 10 in a row.

They are now 10-1-2 overall this season and 3-0 in area play to earn the No. 8 overall ranking in the boys’ standings regardless of classification.

Moving up from the 1A-3A classification has made it difficult for Indian Springs to find consistency this year, but the boys have still managed to gather a winning record to this point at 5-4-1 overall.

Now ranked 10th in the 4A-5A classification, Springs is 1-2 in area play with losses to John Carroll and Briarwood. Making the playoffs means getting by one of those two teams, making every area game the rest of the way a must win.

Finally, in the 1A-3A standings both Westminster at Oak Mountain teams claimed a spot in the top 10 with the girls remaining atop the standings at No. 1.

The Knights have played very few games, but with a 3-1-1 record, they have made them count. Westminster has beaten Westminster Christian, Pell City and Altamont, while losing to Enterprise and tying with Bob Jones.

The boys have had a bit more of a difficult start to the season as defending Class 1A-3A state champions, and have slid all the way down to ninth in the standings.

There is still plenty of time for them to right the ship.

Several track teams shine at King of the Mountain…