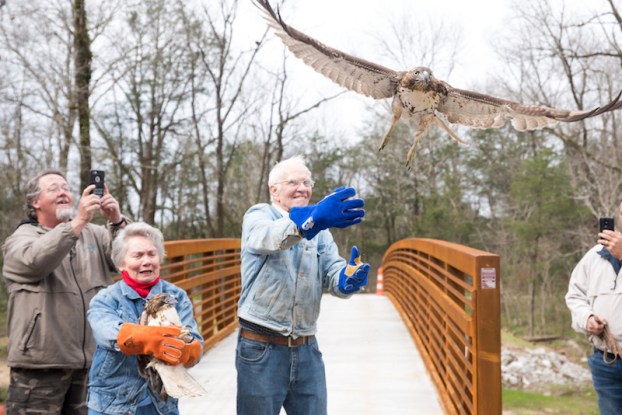 MONTEVALLO – Terry and Sarah Arnold each held a red-tailed hawk in their gloved hands, waiting for Alabama Wildlife Center Executive Director Doug Adair to give them the go-ahead to release their hold on the birds in the new Shoal Creek Park on March 16.

As they extended their arms and let go of the hawks, the Arnolds and a crowd of onlookers watched the birds fly above their heads and land on nearby tree branches in their new habitat.

Adair said the hawks had been hit by cars and were successfully rehabilitated at the AWC. The timing of their readiness to re-enter the wild coincided with the grand opening of Shoal Creek Park, a highlight of the second annual Love Montevallo Day.

“This is a wonderful habitat for red-tailed hawks,” Adair said. “They’re going to do well here.” 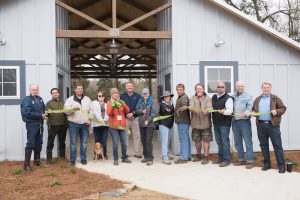 The ribbon is cut at the new Shoal Creek Park pavilion in Montevallo. (Reporter Photo/Keith McCoy)

For several hours, the park was abuzz with activity, as visitors browsed local vendors, participated in guided historical, botanical and geocaching tours; looked at wildlife exhibits by the AWC and Cahaba Environmental Center; and listened to live music by JQ’s One Man Swing Band.

About 50 people participated in the Montevallo Junior City Council’s 5K Color Fun Run benefiting the MJCC and The Arc of Shelby County.

“This has been a long time coming,” Mayor Hollie Cost said of the park’s opening. “This is really only the beginning.”

In 2013, Elizabeth Mahler donated her family’s 167-acre estate and antebellum home to the city to be developed into Shoal Creek Park, a public historic and recreation site with hiking trails and a pavilion created in the image of the Mahler barn.

Ribbon cutting ceremonies were held at the pavilion and the first bridge, where the Arnolds released the hawks.

“This bridge is made possible by Shelby County and the Montevallo Development Cooperative District,” Montevallo City Councilman Rusty Nix said. “That’s going to give us access to the other part of the property for the trails.”

A second bridge funded by a sizable donation from Montevallo residents Terry and Sarah Arnold will be installed on the north end of the property in memory of the late Frank Arnold, the couple’s son.

“This is a special day for your county, but it’s about private citizens making things happen,” Shelby County Manager Alex Dudchock said, recognizing the couple for making a personal contribution large enough to land them in the top percentile of donors giving to a public entity.

Sarah Arnold said her son would have loved the hawk release.

“It was fantastic,” she said, adding her excitement over the park’s opening. “It’s just such a beautiful place. To make it more open … just means the world to us. It’s a wonderful day.”

In addition to the Frank Arnold Bridge, Cost said plans call for five more miles of trails in the park to be developed by the county.

More information about the park is available at cityofmontevallo.com/291/Shoal-Creek-Park.

“I hope to spend some more hours down here,” Terry Arnold said. “This is a wonderful park, and I hope the theme those hawks portray can carry on in this park, for children and adults.”

By NEAL WAGNER / Managing Editor ALABASTER – Members of the Alabaster Board of Education and City Council were effusive... read more