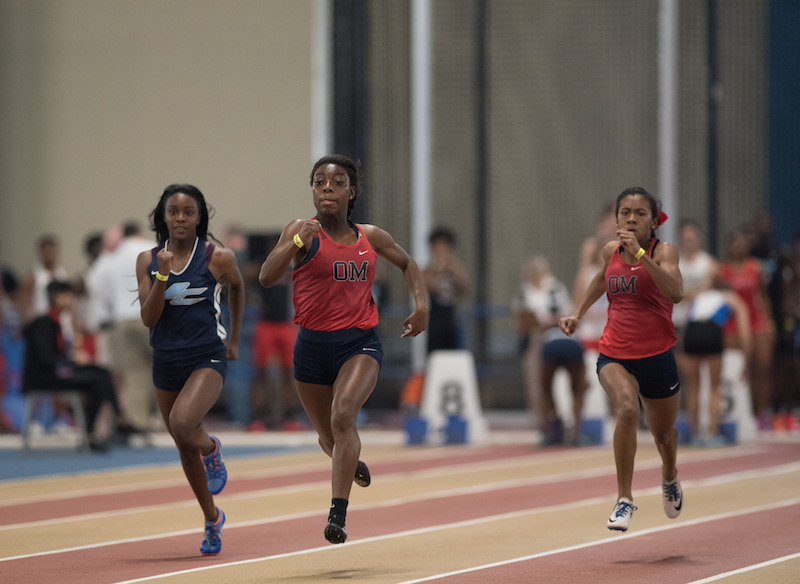 HOMEWOOD – Dating back to the indoor track and field season, it’s been a strong year for local Class 7A teams Oak Mountain, Spain Park and Thompson, and on Saturday, March 16, each added another success event to the track record after performing well at the Homewood Invitational.

It continued an impressive season for the Thompson Warriors with their 12 top three finishers.

Sam Reynolds was one of those that continues to flash his speed by taking second in the 100-meter dash with a time of 11 seconds, which lost in a photo finish. Tyreke Bivins also grabbed 10th in the event.

Dominique Hall was the next top-three finisher, as the sophomore also finished second in the 300 meter hurdles. He finished with a time of 41.36 seconds, which was just behind Hoover’s LJ Hill.

In the 4X100-meter relay, Thompson was able to claim second as a team with a time of 43.96 seconds just behind Oak Mountain in first at 43.20 seconds.

In the boys’ high jump, Jared Hurst picked up a fourth second-place finish for the Warriors with a distance of 6 feet, 2 inches, while Gavin Gray finished seventh in the event.

For the girls, Zakiria Holifield continued an unbelievable spring season with two top three finishes. She took home second in the 200-meter dash with a time of 25.08 seconds, while teammate Alayah King finished seventh. In the 100-meter dash, Holifield picked up a third-place finish with a time of 12.29 seconds.

McKenzie Hogue, who has had an injury-plagued senior season, is still one of the best distance runners in the country and made her presence known in the 1,600-meter run with a finish of second thanks to a time of 5:14. 02.

In the 100 meter hurdles, Briana Rapley added another second place finisher for the Warriors by finishing with a time of 15.63 to just edge out third.

The 300 meter hurdles was also an impressive event for Thompson with Rapley finishing fifth and London Wooley claiming second to give the Warriors two top five finishers.

As a team, Thompson had strong showings in two of the three relay races, winning the 4X100-meter relay and finishing third in the 4X400-meter relay.

Zoria Miller added the only other top three finisher by finishing second in the shot put. Miller finished fifth in the discus final as well.

For the Oak Mountain Eagles, Glen Humphrey continued to shine and was one of the team’s six athletes to finish inside the top three. He claimed second in the 400-meter dash with a time of 49.68 seconds, which was 0.33 seconds behind Jake Nunn from Briarwood in first. He also finished fifth in the 200-meter dash, while teammate Jonathan Bennett was eighth in the same event.

Bennett and Trey Allen had strong showings in the 100-meter dash as well finishing seventh and eighth, respectively.

As a team, the Eagles finished in the top two of two different relays, finishing first in the 4X100-meter relay and second in the 4X400-meter relay.

One of the winners of the day was Harrison Dimick with his first-place finish in the discus throw totaling 159 feet, 2 inches. He also went on to pick up another top-three finish by claiming second in the shot put with a distance of 54 feet, 1 inch.

Kameron McDaniel ended up being one of the biggest highlights for the Spain Park Jaguars with two top five finishes in the 100-meter dash and 200-meter dash.

Steven Pate was also a highlight with his finish of third in the discus throw thanks to a distance of 149 feet, 4 inches.

Josh Wallace had one of the highest finishes for the Jags by finishing second in the javelin throw with a distance of 163 feet, 1.5 inches.

Latest soccer rankings have 5 of possible 8 No.…