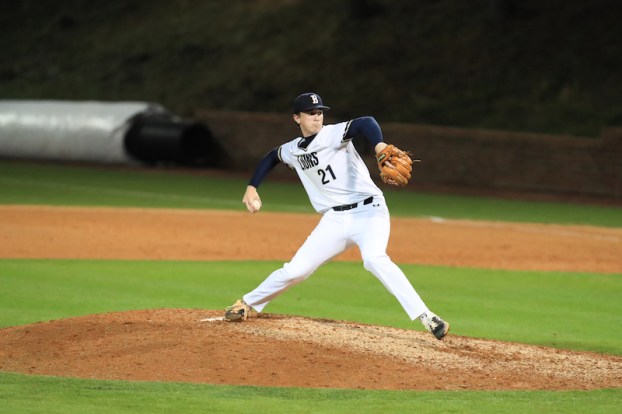 Briarwood's Carson McKinney, above, had a strong showing on the mound against John Carroll to help lead the Lions to their first win of the season. (For the Reporter/Dawn Harrison)

BIRMINGHAM – It’s been a slow start to the 2019 baseball season for the typically strong Briarwood Lions, but that adversity early in the season may end up benefiting a team still very capable of sweeping through its area, and on Tuesday, March 19, we saw the first step of that.

After starting the season 0-11 with every game coming against an opponent in a higher classification—several of which were against top 10 teams—the Lions were able to take down John Carroll 4-2 to start area play 1-0 and pick up their first win of the season at the perfect time.

Briarwood struggled to get the bats going early on and fell behind 1-0, but between the third and fifth innings, the Lions put together all four of their runs, while Carson McKinney and Noah Whatley did more than enough on the mound to stave off any comeback attempts by the Cavaliers.

McKinney got the start on the mound and struck out seven batters, while allowing just three hits and two runs. Whatley pitched the final three innings in relief and allowed just two hits, while striking out four of the 11 batters he faced to close the game.

In the bottom of the first, John Carroll struck first with a two-out RBI-double to take the early 1-0 lead, but Briarwood settled in after that.

After a 1-2-3 inning defensively, the Lions stepped to the plate in the top of the third looking to tie or take the lead.

A lead-off walk from Tyler Waugh and a double from Bryce Perrien quickly put two runners in scoring position. While the damage was limited, Cal Higdon was able to drive in one run on a ground out during the next at bat to tie the game at 1-1, before two pop outs ended the threat.

The Lions then took advantage of an Eli Steadman walk in the top of the fourth when Parker Hutson singled him home to give Briarwood a 2-1 advantage.

John Carroll then came back and tied the game with another two-out RBI-double in the bottom of the fourth to make it 2-2.

That’s when the Lions finally put together an inning with more than one run. After Perrien led the top of the fifth off with a single, an error and walk loaded the bases shortly after with one out.

Briarwood didn’t pick up another hit the remainder of the inning, but a wild pitch and a groundout allowed both Wesley Helms and Perrien to score for a 4-2 lead.

While that was the final run for the Lions, the Cavaliers went scoreless over the final three innings to lead Briarwood to the victory.

Briarwood was led by Perrien at the plate with a 2-for-3 game featuring one scored run. Christian Ferguson and Hutson both added hits, while Sam Hamner, Hutson and Higdon added RBIs.